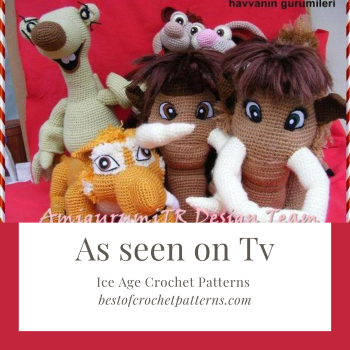 It is time for another post from As seen on TV series. You can read the others here. Today I will write about Ice Age Crochet Patterns.

I am sure you all know Ice Age – an American media franchise centering on a group of mammals surviving the Paleolithic ice age. It consists of computer-animated films and TV specials and a series of video games.

Five films have been released in the series thus far: the original movie of the same name in 2002, Ice Age: The Meltdown in 2006, Ice Age: Dawn of the Dinosaurs in 2009, Ice Age: Continental Drift in 2012, and Ice Age: Collision Course in 2016. As of April 2016, the franchise had generated $6 billion in revenue, making it one of the highest-grossing media franchises of all time.

The series features the voices of Ray Romano, John Leguizamo, Denis Leary, and Chris Wedge, who are the only constant cast members. 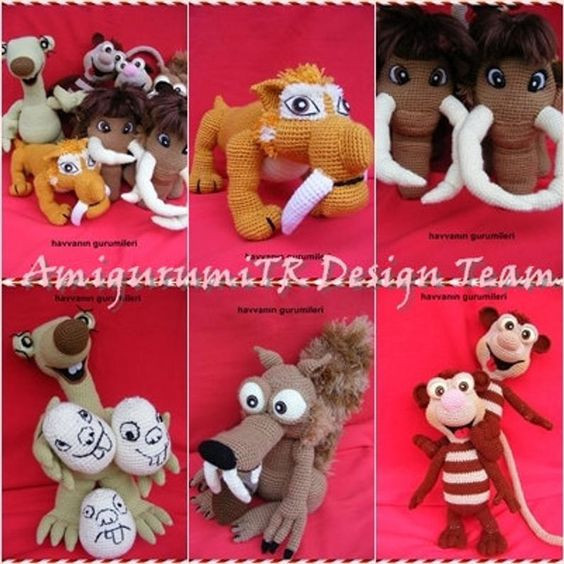 While the first film generally received positive reviews, the series has received some criticism for not attempt to be scientifically accurate and has suffered a steadily declining critical reception with each succeeding film.

The only stipulation that consulting anthropologists from the American Museum of Natural History in New York insisted on with the production was that there should be no dinosaurs. They would have been long gone 20,000 years ago, though many of the animals shown in the film didn’t live in the same eras or locations as the main characters. Dinosaurs were finally included in the second sequel, Ice Age: Dawn of the Dinosaurs (2009), the explanation is that they survived extinction in underground caves.

The first film opened in March 2002. Within three weeks, it had become the first film of that year to pass the $100 million milestone in box office takings.

The drawings of characters during the end credit roll were all done by the children of the animators. The same is true of the picture that Sid draws of himself on a cave wall. Sid’s drawing was done by 3-year-old Will Shefelman, son of a story artist Dan Shefelman. The story artist working on the scene was having difficulty drawing like a 3-year-old, so he consulted an expert.

Müge Yıldırım made all patterns in this post, she is the founder of the AMIGURUMITRDESIGN Etsy Shop. Click on the link or on the photos to get to her beautiful shop, and see all of her amazing patterns.

Manfred (aka Manny) is the main protagonist of the Ice Age films, a significant character in the Christmas special, and the Easter special deuteragonist. He is a harmless male mammoth who is the husband of Ellie and the father of Peaches.

Manny is a large 10-ton bull woolly mammoth. He has brown eyes and brown fur with dark highlights on his head, and along his mane, he sports a large pair of tusks and a trunk. In all Ice Age movies, whenever someone has described Manny as being “fat”, he objects, stating that his fur makes him “look big” because it’s “poofy.”

He is voiced by Ray Romano. But James Earl Jones, Johnny Depp, and Pierce Brosnan were initially considered to play Manny.

Ellie is a female woolly mammoth that is part of a herd of different animals that were all brought together.

Born into a family of elephants that lost her as a calf, Ellie met a mother possum soon after, who adopted her as her own daughter, accepting her into possum life as part of her family.

Ellie grew up to be an elephant that saw herself and her adoptive brothers Crash and Eddie as a possum. This view changed when she met another elephant, a male named Manny, who showed her that she was an elephant: after this, she and her brothers joined Manny’s herd.

I can’t imagine being the last one of your species.” [Manny says he isn’t] “Oh you brave, brave soul! That’s right! Don’t give up hope!

[After seeing her and Manny’s shadows match] You’re right! There the same! You must be part opossum! 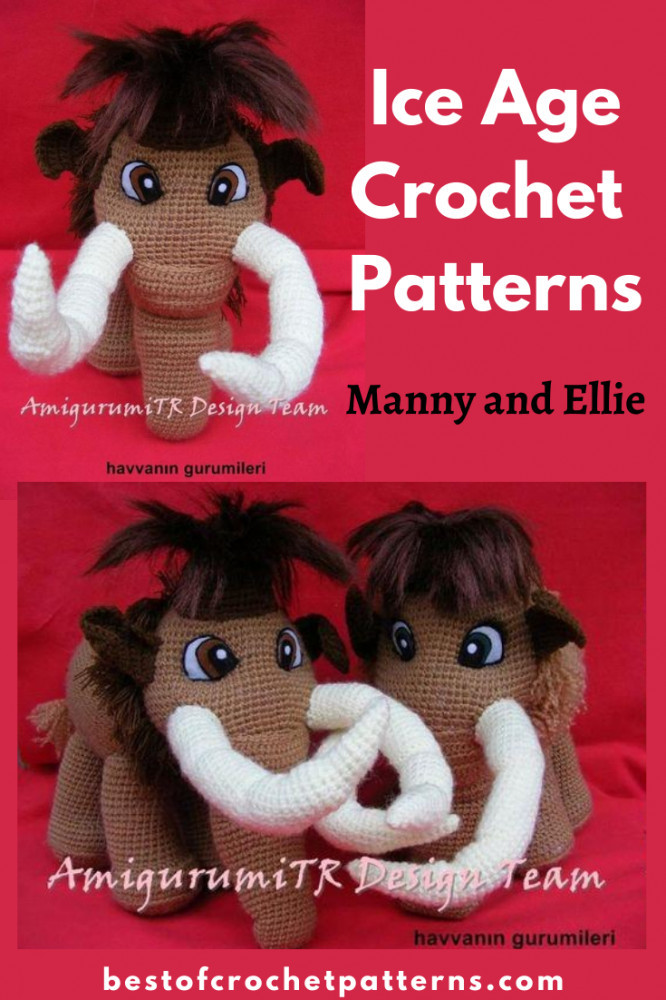 Sid (complete name Sidney) is the deuteragonist of the Ice Age series. He is a ground sloth who appears in all Ice Age movies. All ground sloths in this film and its successors were designed with traits of prehistoric ground sloths and modern tree sloths.

Sid is portrayed as unfit and naive. However, he is also talkative, positive, caring, and loyal to his friends. And he is also known as imaginative, devoted, thoughtful, helpful, even-tempered, shiftless, loving, outgoing, trustworthy, and humble. Sid also suffers from a lateral lisp, which makes his “S” and “C” pronunciation rather “wet” or “spitty”.

Sid is usually the one getting knocked about, either by accident or on purpose.

He is considered as the only character with bad karma but immediately learns his lesson soon afterward.

“I don’t know about you guys, but we are the weirdest herd I’ve ever seen.”

“This is gonna be the best migration ever! I’m gonna show you all my favorite watering holes. And I turn brown when the fungus in my fur dries out!”

Sid: Maybe we could rapidly evolve into water creatures. 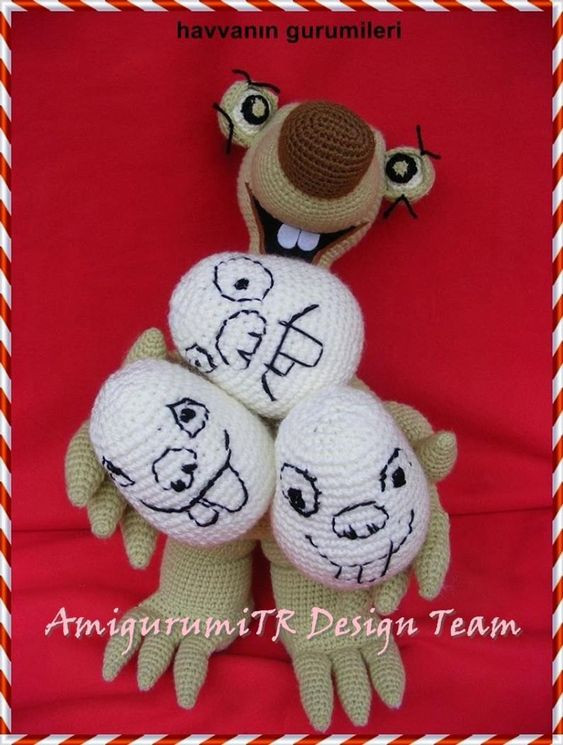 Diego is the tritagonist of the Ice Age series. He is a male saber-tooth tiger who appears in all Ice Age films.

Diego is first shown as the sinister and serious type, but he softens as he travels with Manny and Sid to return a baby to his human tribe. He also has a playful side, harassing Sid for fun and actually enjoying sliding in the ice cavern.

Diego shows great bravery in several scenes, showing a calm attitude when Manny had his tusk point to Diego’s throat after pinning him to a rock wall. By the end of the movie, Diego bonds with Manny and Sid and joins them in their migration to the south.

Diego is always the one to step in whenever his friends are in danger. And he goes to great lengths to do it, as shown when Diego almost lost his life in an attempt to save Manny’s.

Denis Leary voices him, but Antonio Banderas, Anthony Hopkins, and Kiefer Sutherland were considered the role of Diego.

According to an interview with Jay Leno in 2012, Diego originally died near the end of the film, which caused the test audience of children to burst into tears, so it was re-done.

“That’s what you do in a herd.” (His apparent last words). 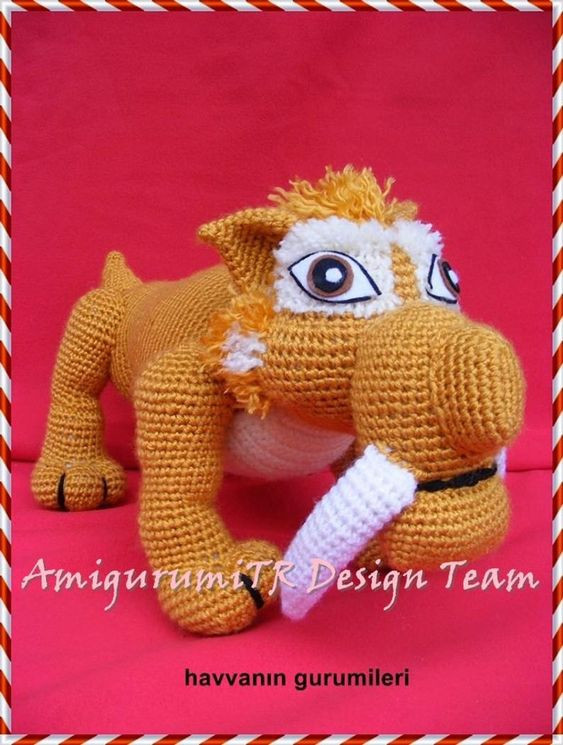 Scrat is commonly shown in scenes as a comic relief character, involving the gang, but never interacts with them, directly with a few exceptions. He appears in all four films, as well as his own short films.

He usually has his own stories in the film, independent of the main plot, which is parallel with the journeys of the other main characters only by chance, making the other characters meet him occasionally.

Although not fully part of the gang, Scrat has proven to be enormously successful and has become a breakthrough character of the series.

Chris Wedge, the director, is the voice of Scrat, but has no intelligible dialogue; the plan to have Scrat talk was quickly dropped, as he worked better as a silent character for comedic effect.

The name ‘Scrat’ is a combination of the words ‘squirrel’ and ‘rat’, as Scrat has characteristics of both species; Wedge has also called him “saber-toothed squirrel.”

Scrat’s opening adventure was inserted because, without it, the first real snow and ice sequence wouldn’t take place until about 37 minutes into the film. This was the only role intended for Scrat, but he proved to be such a popular character with test audiences that he was given more scenes, and has appeared in other movies.

Though Scrat was designed as a fictional animal, in 2009, scientists in Argentina unearthed the remains of a small, extinct mammal resembling a shrew with long fangs. This animal was given the scientific name of “Cronopio Dentiacutus”, in tribute to Scrat. 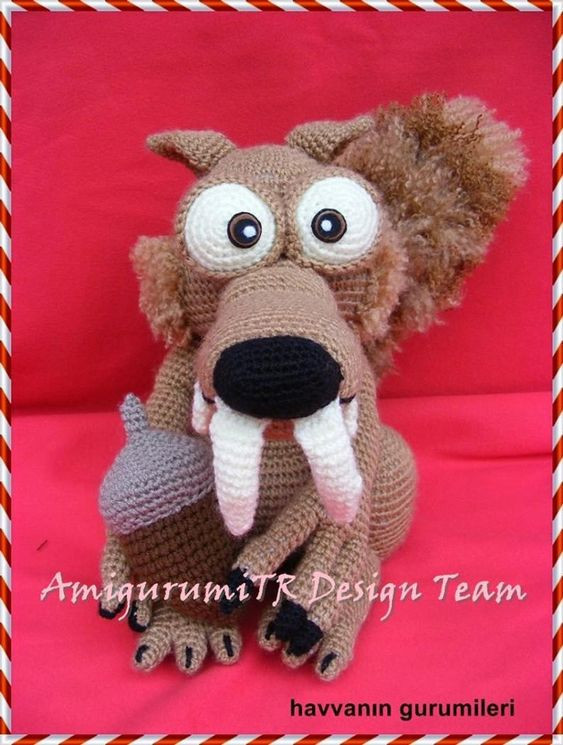 Crash and Eddie are two twin brother opossums. Adoptive brothers of Ellie, they cared for her and taught her to hang by her tail from a tree branch when she slept, as they did. They are shown to be adventurous and fun-loving, courtesy of the fact that they’re both very stupid.

They first made their presence known to the opening characters by means of shooting pebbles through reeds at Sid and Diego, then roasting them to humiliate them, but Diego began chasing them, leading both Sid and Diego to Ellie. After Sid invites them to travel with them, Ellie and her brothers agreed, much to Manny’s annoyance.

[Singing] I believe I can fly! [He crashes into a tree] 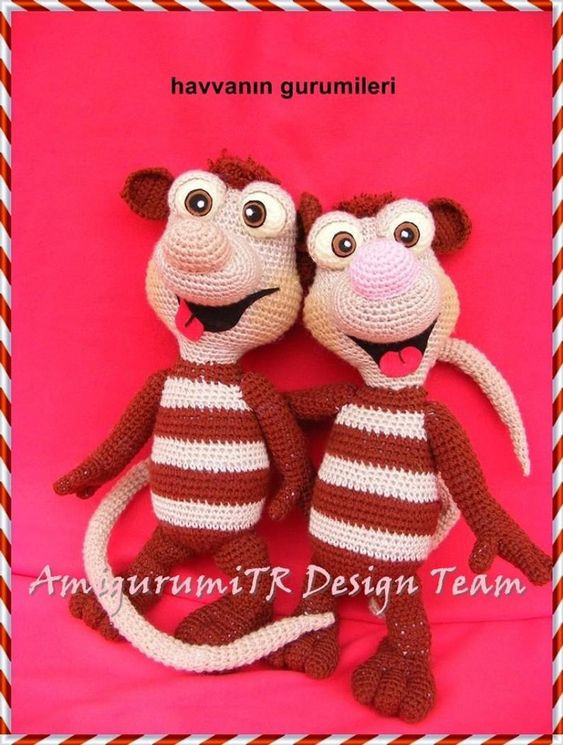 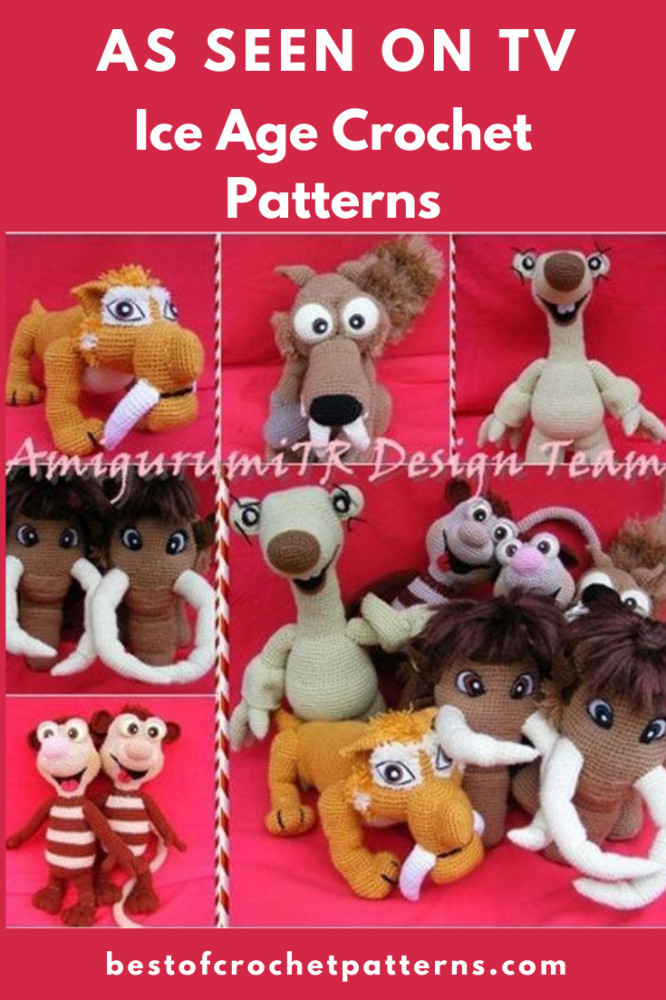 I hope you enjoyed a little trivia about the Ice Age, and I hope this article wasn’t too much of a spoiler for you. Which character do you like the most? Did you see all the movies?