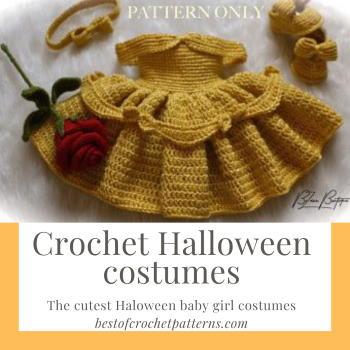 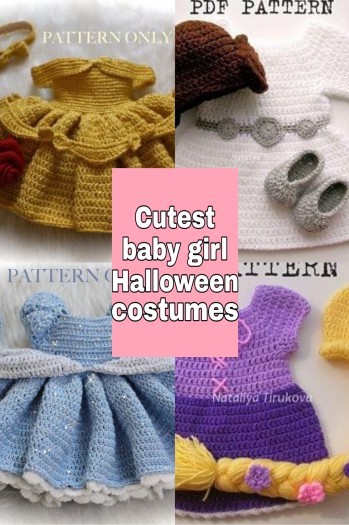 Tinker Bell is a fictional character from J. M. Barrie’s 1904 play Peter Pan and its 1911 novelization Peter and Wendy. She has appeared in a variety of film and television adaptations of the Peter Pan stories, in particular, the 1953 animated Walt Disney picture Peter Pan.

All the characters in Peter Pan are in some way touched with magic,” Walt Disney once observed. He added, “The little fairy Tinker Bell glows like a firefly and leaves a trail of pixie dust behind her as she flits about with the speed of a hummingbird.”

Tinker Bell’s pattern is an instant download PDF. Sizes included in the pattern are for 0-3 months and 3-6 months old babies. The pattern is written in English using US crochet terms. The set consists of a dress, booties, and hat. It is not a complicated pattern, but you need to be familiar with basic techniques and stitches.

The pattern designer is Nataliya from Moscow, Russia, and the name of her Etsy shop is Nataliyaknitting. 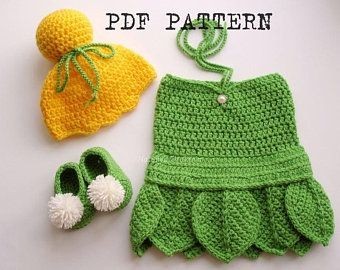 Princess Belle is the fifth Disney princess and one of the lead characters of the 1991 film Beauty and the Beast, which was based on a fairy tale by Jeanne-Marie Le Prince de Beaumont. Belle is widely praised for her intelligence, courage, independence, and her love for books.

Belle has long, brown hair, most often tied back in a low ponytail. She possesses captivating hazel eyes, full lips, rosy cheeks, and a sculpted figure. One of her more distinct features are the strands of hair that are constantly slipping loose from her ponytail and falling in front of her face.

Belle has gained a significant amount of intelligence over the years due to her love of books, providing her with a fantastic vocabulary, active imagination, and an open mind. She is very confident and outspoken in her opinions, and seldom likes being told what to do. Belle isn’t concerned about hers or other’s appearances and can look past how people appear and into their hearts. That is how Belle eventually learns to love the Beast despite his unsightly outward appearance and restore love and laughter to the castle.

Princess baby Belle dress pattern is an instant PDF File Download. It includes instructions to crochet one Baby Belle Dress, headband, and shoes. Size is newborn to 3 months. The pattern contains a lot of detailed instructions and step-by-step photographs. There is also included a pdf of a version without illustrations for easy printing.

It is a great dress for any occasion, Halloween, birthday, and also a great photo prop as well. The shoes are Mary Jane style shoes with a strap that fastens with a button. Shoes also have a double sole for added support. The headband is made with the same print design as a dress with a bow attached. The rose pattern is sold separately, not included in this set.

The name of the Esty shop is BeZazz. 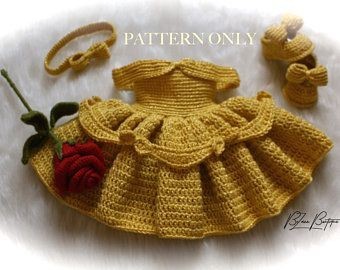 Even after eight decades, Snow White is still the fairest of them all. Snow White is a 19th-century German fairy tale that is today known widely across the Western world. The Brothers Grimm published it in 1812 in the first edition of their collection Grimms’ Fairy Tales.

Early concept art depicted Snow White as a blonde. Her raven hair became one of her defining physical characteristics, as the Magic Mirror described her beauty in detail to the Evil Queen: “Alas, she is more fair than thee: Lips red as the rose, hair black as ebony, skin white as snow.

The Snow White baby costume pattern contains instructions to crochet a dress and shoes. It includes sizes from newborn to 0-3, 3-6, 6-9, and 9-12 months, old baby. It is an intermediate pattern written in American terminology. To use it, you must be familiar with basic stitches and techniques.

The pattern designer is Jimmie Sweat from Leavenworth, Kansas, United States, and the name of her Etsy shop is DaisyMaesBoutique331. 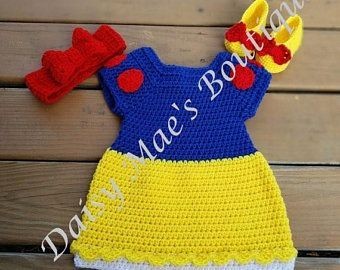 Cinderella, or The Little Glass Slipper, is a folk tale embodying a myth-element of unjust oppression and triumphant reward. Thousands of variants are known throughout the world. The title character is a young woman living in unfortunate circumstances that are suddenly changed to remarkable fortune. The Greek story of Rhodopis, from sometime between around 7 BC and 23 AD, is usually considered to be the earliest known variant of the Cinderella story. The story is about a Greek slave girl who marries the king of Egypt. The version that is now most widely known in the English-speaking world was published in French by Charles Perrault in 1697. Brothers Grimm later published the story in their folk tale collection Grimms’ Fairy Tales in 1812. Did you know that Cinderella is originally a Greek story?

The word Cinderella means one whose attributes were unrecognized or one who unexpectedly achieves recognition or success after a period of obscurity and neglect.

Cinderella’s baby dress pattern is a PDF File Instant Download and contains instructions to crochet one Baby Cinderella Dress, Cinderella Heels (Glass slippers), and Cinderella Headband. Size is 0 to 3 months. The pattern includes a lot of detailed instructions and step-by-step photographs. There is also a version without photos for easy printing.

This dress is right out of the storybooks, with puffy sleeves, buttons in back, and a full skirt with lace edging. Designed with sequin yarn (if desired) to add shimmer and shine to sparkle as every Cinderella should. It is a great dress for any occasion, birthday, Halloween, and also a great photo prop as well. The headband and glass slippers are perfect accessories to complete this Cinderella-style set.

The name of the Esty shop is BeZazz. 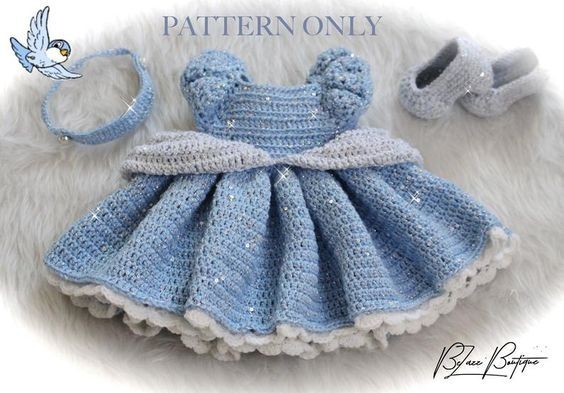 Minnie Mouse is a funny animal cartoon character created by Ub Iwerks and Walt Disney. Mickey Mouse and Minnie first appeared in Steamboat Willie in 1928. However, Mickey tends to get more notoriety on this day than Minnie.
In honor of her 90th anniversary, in 2018, she joined the ranks of other animated celebrities by receiving her own star on the Hollywood Walk of Fame. She is the sixth Disney character to receive this honor. Mickey Mouse, Donald Duck, Winne the Pooh, Tinker Bell, and Snow White have already received this distinction.

Minnie didn’t wear red and pink in the earlier cartoons. When the cartoons were in color, Minnie most often wore a combination of blue, green, and black.

Minnie’s pattern is an instant Download PDF written in English using US crochet terms. It includes instructions for a dress, hat, and booties. Sizes included in the pattern are 0-3 months old baby. It is not a complicated pattern, but you will need to be familiar with basic techniques and stitches.

The pattern designer is Nataliya from Moscow, Russia, and the name of her Etsy shop is Nataliyaknitting. 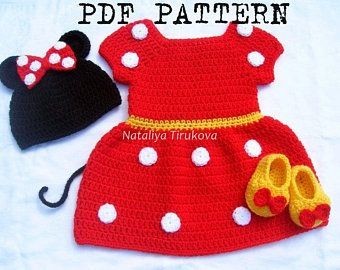 Rapunzel is loosely based on the fairy tale of the same name published by the Brothers Grimm in 1812.

Rapunzel is a spirited, intelligent, kind, playful, and a very adventurous girl in her late teens, though a bit naive. However, she is not afraid to stand up for herself or others when the situation calls for bravery. Repunzel spent all of her life isolated in a tower. She is educated in literature, and talented in almost all areas such as music and baking and even more advanced subjects like astronomy.

The costume is an Instant Download pattern written in English using US crochet terms. The set includes a dress, booties, and hat for 0-3 months old baby. It is not a complicated pattern, but you will need to be familiar with basic techniques and stitches. 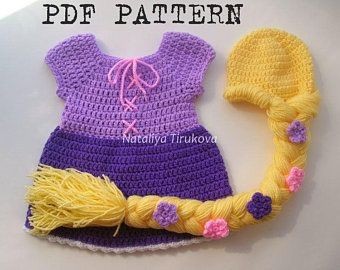 Princess Leia Organa is a fictional character in the Star Wars franchise, portrayed in films by Carrie Fisher. Introduced in the original Star Wars film in 1977, Leia is the princess of the planet Alderaan, a member of the Imperial Senate and an agent of the Rebel Alliance. She underminds Lord Darth Vader and helps bring about the destruction of the Death Star.

Leia’s unique hairdo in 1977’s A New Hope has come to be known as the “doughnut” or “cinnamon buns” hairstyle and is iconic of the character and series. Asked about his inspiration for the haircut, George Lucas went with a kind of Southwestern Pancho Villa woman revolutionary look, which is what that is. The buns are basically from turn-of-the-century Mexico. Did you know that?

For the last forty years, Princess Leia is a name that has been synonymous with the strength, capability, and beauty that women bring to the Star Wars universe. From her epic hairstyles to her complicated family history, Leia Organa Solo has been one of the most human characters in the Star Wars saga. The daughter of both a brutal Dark Lord of the Sith and good-hearted prince from a doomed planet, the role was at one time one of the most coveted in all of Hollywood. Princess Leia has been a senator, a military leader, and everything in between, becoming one of Star Wars’ most enduring characters.

Princess Leia pattern is an instant Download PDF written in English using US crochet terms. The design includes a dress, hat, and booties for 0-3 months and 3-6 months old baby. It is also not a difficult pattern, but you will need to be familiar with basic techniques and stitches.

The pattern designer is Nataliya from the Nataliyaknitting shop. She has so many fascinating designs there. You should check her out. 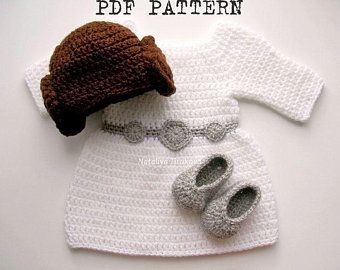 These are seven of the most adorable crochet Halloween costumes for baby girls. They can be used for cute photo probs as well. I wanted to introduce the characters so that you will get to know their story. Some of them are pretty fascinating.

Pin this article for later here: 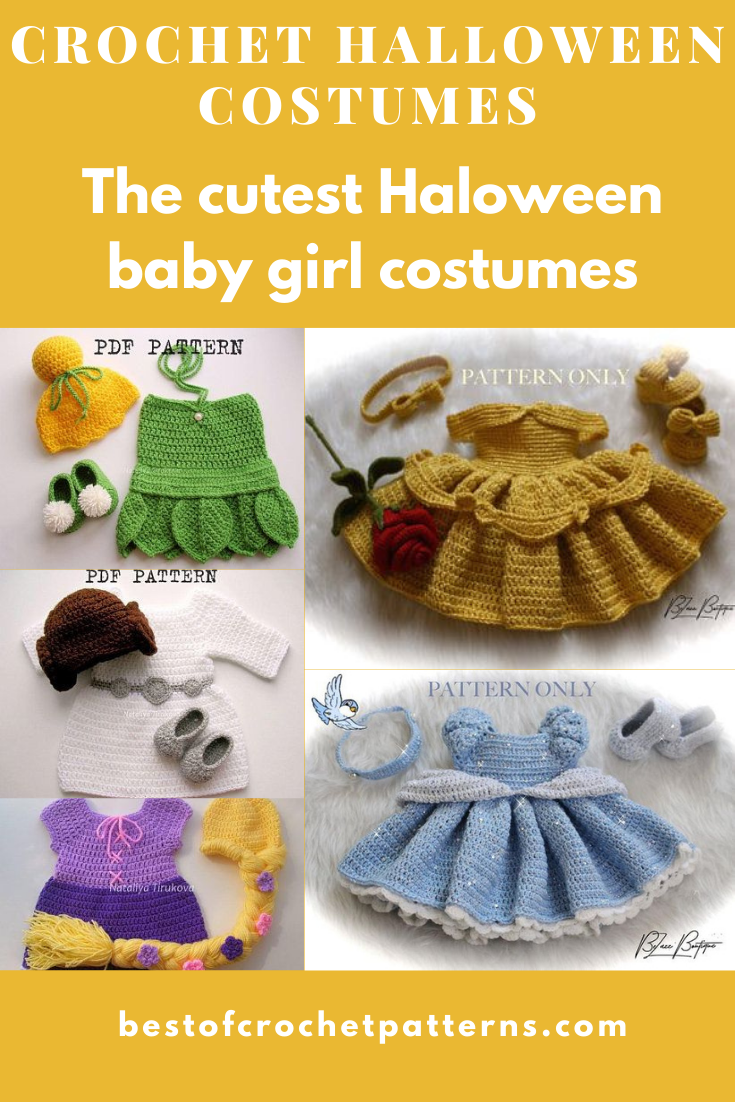 Do you like these patterns for Halloween costumes? Which one will you make? I would love to know; please tell me in the comments below. Thank you.

Have a beautiful day.