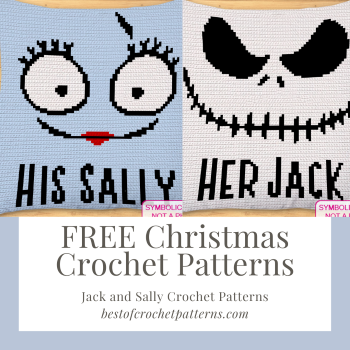 Today I wanted to share with you two Cute Christmas Pillow Patterns for FREE. 🙂 You can Download them below.

And you can find a C2C version of this pattern here: Jack and Sally C2C Blanket Patterns

The Nightmare Before Christmas is a 1993 American stop-motion animated musical dark fantasy holiday film directed by Henry Selick (in his feature directorial debut) and produced and conceived by Tim Burton.

It tells the story of Jack Skellington, the King of “Halloween Town,” who stumbles upon “Christmas Town” and becomes obsessed with celebrating the holiday.

Over the years, Burton’s thoughts regularly returned to the project, and in 1990, he made a development deal with Walt Disney Studios. Production started in July 1991 in San Francisco; Disney initially released the film through Touchstone Pictures because the studio believed the film would be “too dark and scary for kids”.

The film met with critical and financial success, earning praise for its animation (particularly the innovation of the stop-motion art form), characters, songs, and score. It has grossed $91.5 million worldwide since its initial release and garnering a cult following.’

The Nightmare Before Christmas’ is the first film to receive a nomination at the academy awards for best visual effects. The film has since been reissued by Walt Disney Pictures and was re-released annually in Disney Digital 3-D from 2006 until 2010.

Pin this for Later Here: 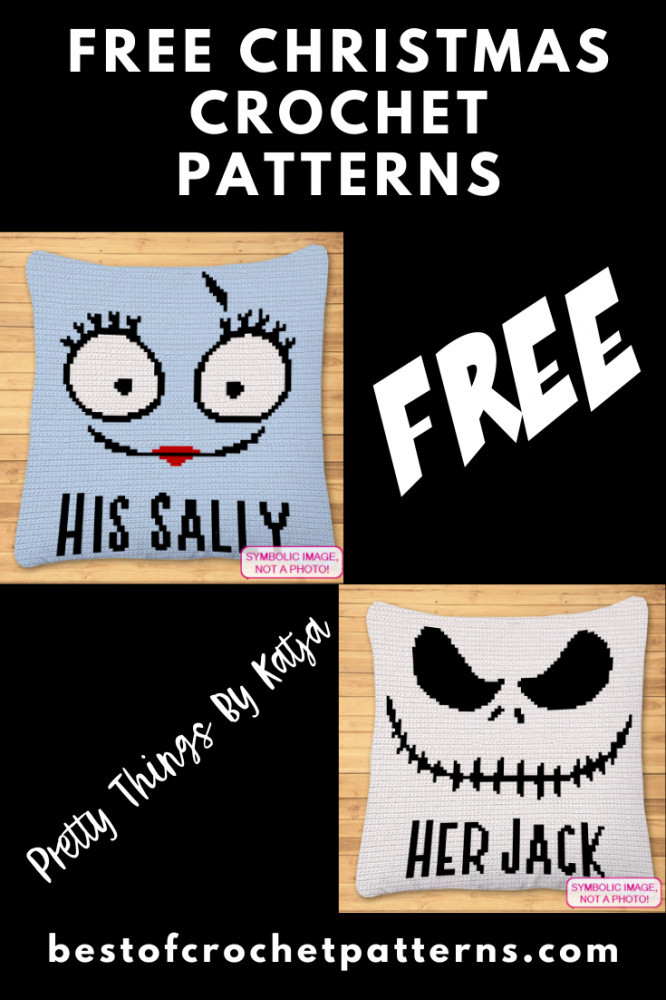 If you are not familiar with the movie, here is the plot (Spoiler alert):

Halloween Town is a fantasy world filled with various monsters and supernatural beings associated with the holiday. Jack Skellington, respected by the citizens as the “Pumpkin King”, leads them in organizing the annual Halloween celebrations.

However, Jack has grown weary of the same yearly routine and wants something new. So, wandering in the woods the following day, he encounters six trees containing doors leading to other holiday-themed towns and enters the one for Christmas Town.

Awed by the unfamiliar holiday, Jack returns to Halloween Town to show the residents his findings, but unaware of the idea of Christmas; they compare everything to their ideas of Halloween. However, they do relate to one Christmas Town character: its ruler, Santa Claus, or “Sandy Claws,” as Jack mistakenly calls him.

Jack sequesters himself in his tower to study Christmas further and find a way to explain it rationally but ultimately decides that Christmas Town deserves a break and announces that Halloween Town will take over Christmas this year.

Sally, a beautiful ragdoll woman who secretly loves Jack, experiences a vision that their efforts will end disastrously. Still, Jack dismisses this, tasking mischievous trick-or-treating trio Lock, Shock, and Barrel to abduct Santa and bring him to Halloween Town.

Jack tells Santa he will be handling Christmas in his place this year and orders the trio to keep Santa safe, but against his wishes, they instead deliver Santa to Oogie Boogie, a gambling bogeyman, who plots to play a game with Santa’s life at stake. Sally attempts to rescue Santa to save Jack from his potential fate, but Oogie captures her as well.

Jack departs to deliver his presents in the real world, but they instead frighten the populace, forcing people to lock their homes. When word spreads about Jack’s presumed wrongdoings, he is shot down by the military, causing him to crash in a cemetery.

While the saddened residents of Halloween Town think he is dead, Jack has actually survived. While he mourns the disaster he has made of Christmas, he finds he enjoyed the experience nonetheless, reigniting his love of Halloween, but soon realizes he must act to fix his mess.

Jack returns to Halloween Town and infiltrates Oogie’s lair, confronting and defeating him by ripping apart a thread holding his cloth form together, causing the bugs inside him to spill out, reducing him to nothing. Jack apologizes to Santa for his actions. Despite being furious at Jack for the chaos he caused and for ignoring Sally’s forewarnings, Santa remains confident that he can fix things and departs.

As Santa replaces Jack’s presents with genuine ones, the townspeople of Halloween Town celebrate Jack’s survival and return. Santa then shows he has forgiven Jack by bringing snowfall to Halloween Town, which fulfills Jack’s original dream and causes the Halloween Town residents to realize what Christmas is really about finally.

Afterward, Jack and Sally meet on Spiral Hill and declare their love for each other.

“For it is plain as anyone can see, we’re simply meant to be.” -Jack and Sally.

I hope you enjoyed my post, and here is the Her Jack Pillow Pattern you can download. 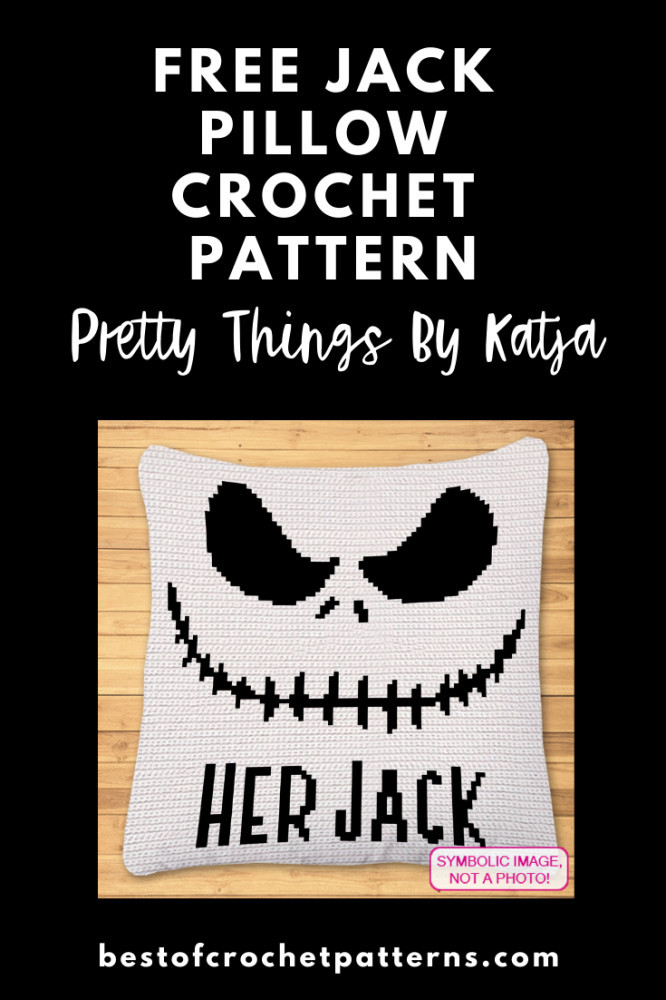 And here is the His Sally Pillow Pattern you can download.

(Just click on the link or the photo below): 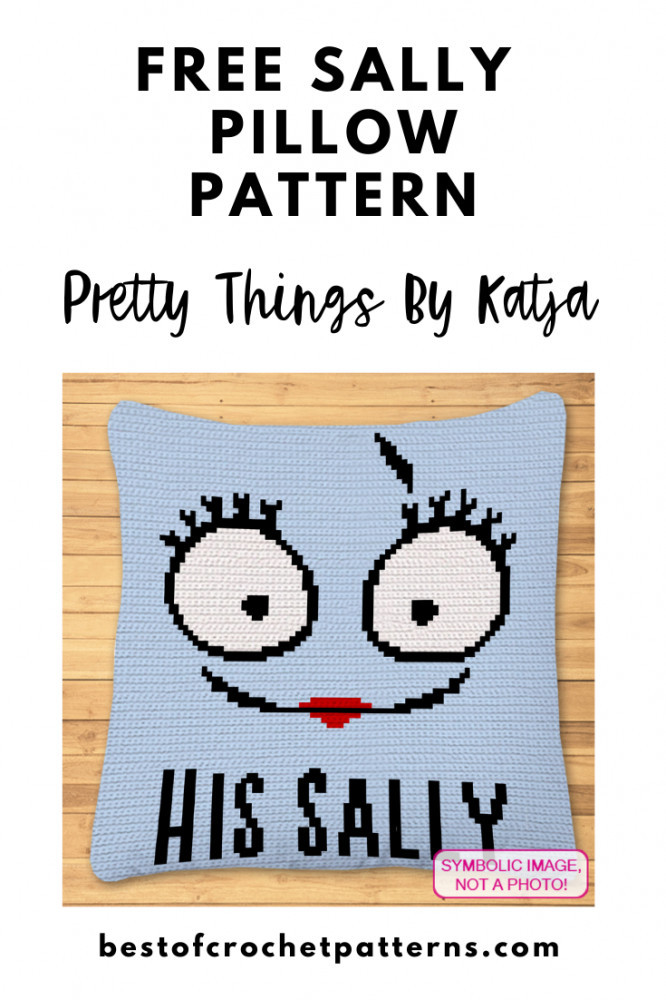 And if you like this Pattern, you can check out my Etsy Shop Pretty Things By Katja and find more Christmas Patterns here. You can use the code: BESTOFCROCHET and get 20% off.

But if you join my Email List, you get a Coupon for 50% off and free patterns directly to your inbox.  So Sign up now!

“My dearest friend, if you don’t mind, I’d like to join you by your side, where we can gaze into the stars and sit together now and forever.” ~ Jack Skellington.

Which part of the Nightmare before Christmas Movie did you like best? Share it with me in the comments below.