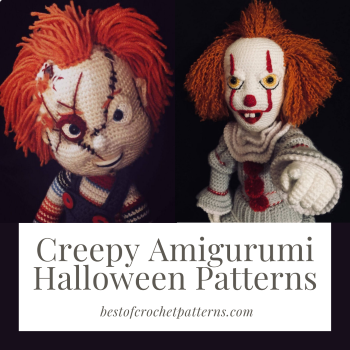 I have found such an amazing and creepy Amigurumi patterns; I had to share them with you. I think these are the best Horror movie amigurumi characters I have seen. All of them are from the AfterDarkCrochet Etsy shop.

The founder of this Scary Etsy shop is a Mindy Kindley, a stay at home mom of two from North Charleston, South Carolina, United States.

I guess she loves Horror movies because her amigurumis are so realistic and creepy, you get scared just by looking at their photo.

The first Horror movie amigurumi pattern I want to show you is Sam from Trick ‘r Treat.

It relates four Halloween horror stories with a common element: Sam, a mysterious child trick-or-treater wearing shabby orange footie pajamas with a burlap sack over his head. The character makes an appearance in each of the stories whenever a character breaks Halloween traditions.

If you want to create him, you can get the pattern here or click the photo below. 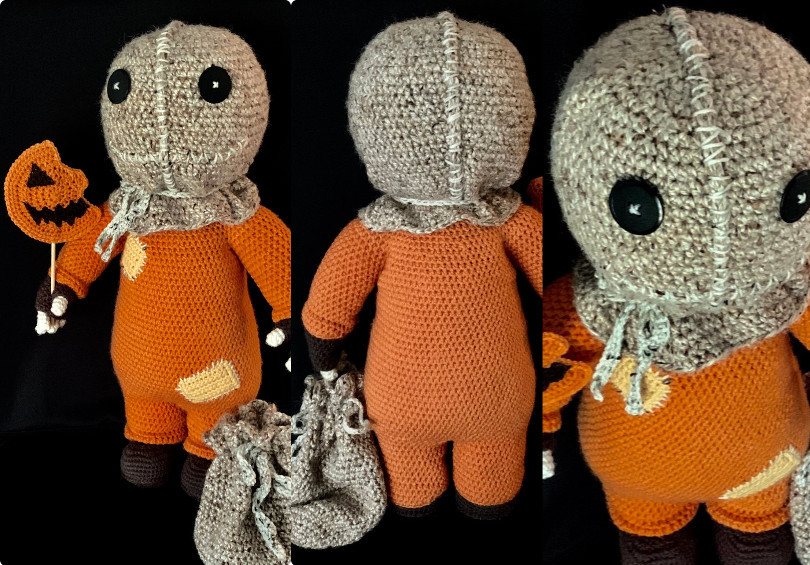 The next one is Chucky.

Charles Lee “Chucky” Ray is a fictional character and the main antagonist of the Child’s Play slasher film franchise. Chucky is portrayed as a notorious serial killer whose spirit inhabits a “Good Guy” doll and continuously tries to transfer his soul from the doll to a human body.

The character has become one of the most recognizable horror icons, often mentioned alongside Freddy Krueger, Jason Voorhees, Ghostface, Leatherface, Pennywise, Pinhead, Leprechaun, Jigsaw, and Michael Myers. You will find the patterns for many of those icons below.

In 1999, the Chucky character was nominated for the MTV Movie Award for Best Villain for the film Bride of Chucky.

Get the Chucky here or the photo below. 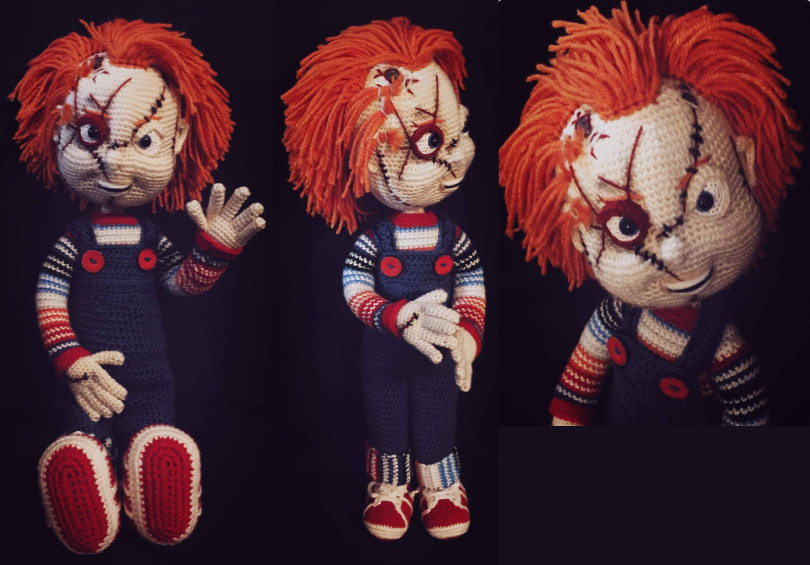 I had no idea there were so many Chucky movies!

Chucky made his first appearance in the 1988 film Child’s Play. In the film, serial killer Charles Lee Ray (Brad Dourif) uses a voodoo ritual to transfer his soul into a Good Guys doll to escape from Detective Mike Norris (Chris Sarandon). Now living in the animated doll, Chucky (voiced by Dourif) is given to young Andy Barclay (Alex Vincent) and begins terrorizing the family.

Chucky made his second appearance in the 1990 sequel, Child’s Play 2. In the film, a resurrected Chucky continues his pursuit of Andy, who has been placed in foster care after the first film’s events.

In Child’s Play 3 (1991), Chucky again returns from the grave eight years after the previous film’s events to terrorize a now teenage Andy who is currently in a military academy.

Bride of Chucky (1998) continues the story, with Chucky being resurrected by a former accomplice and girlfriend, Tiffany Valentine. After transferring Tiffany’s soul into a bride doll, the two terrorize a young couple in an attempt to transfer their souls into human bodies. 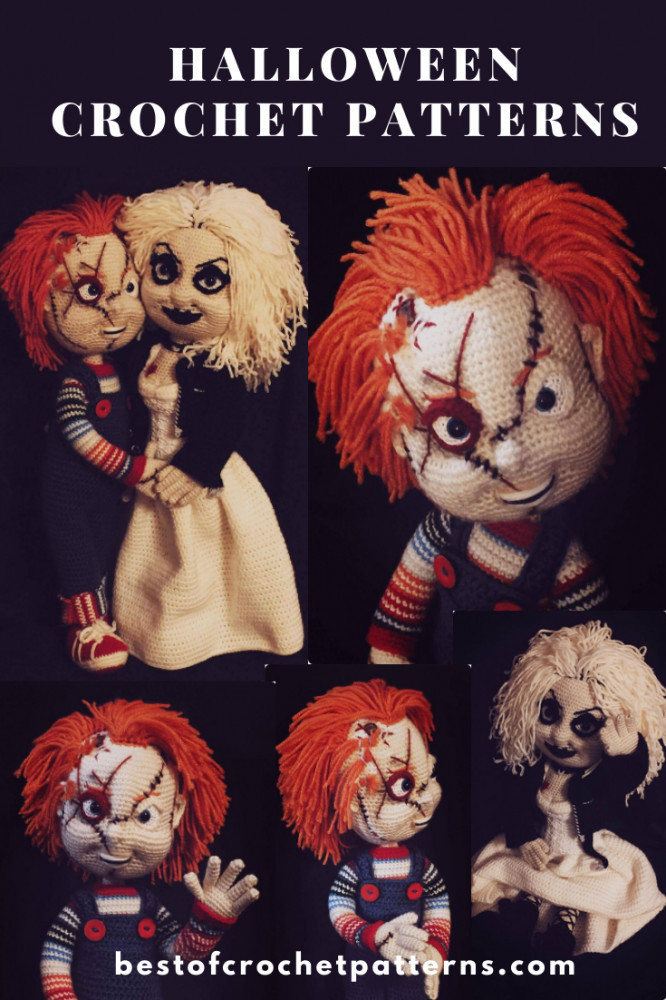 The seed of Chucky (2004) follows six years after the previous film when Glen/Glenda, the child of Chucky and Tiffany, brings his parents back to life. The trio then set their sights on actress Jennifer Tilly (in a fictionalized version of herself), for whom they have sinister plans.

The 2013 film Curse of Chucky saw the series return to the straightforward horror elements found in the first three films. The film takes place twenty-five years after the events of the first film, as Chucky torments Nica Pierce.

In Cult of Chucky (2017), Chucky returns to torment a now institutionalized Nica, while a now adult Andy attempts to stop Chucky’s plans once and for all.

In the 2019 remake of Child’s Play, Chucky is presented as a high-tech artificially-intelligent Buddi doll created by the Kaslan Corporation. Primarily designed to be a life-long companion to its owner by learning from its surroundings and acting accordingly, Buddi dolls can also connect to and operate other Kaslan products. One such doll has its safety precautions disabled by a disgruntled Kaslan employee during the assembly process, and as a result, Chucky gradually develops murderous tendencies as he tries to eliminate anyone or anything who’s stopping him and his “best buddy” Andy Barclay from staying best friends forever.

Of course, there is a pattern for Chuckies bride too! If you are a fan, you need to have both of them.

Bride of Chucky is a 1998 American black comedy slasher film written by Don Mancini and directed by Ronny Yu. It is the fourth installment in the Child’s Play franchise.

Unlike the first three films, Bride of Chucky takes a markedly humorous turn and often into self-referential parody. It does not continue the concept of a child in possession of the doll but focuses mainly on Chucky.

The film was released in October 1998 and grossed $50.7 million worldwide on a $25 million budget.

Get the Chucky’s bride pattern here or click the photo below. 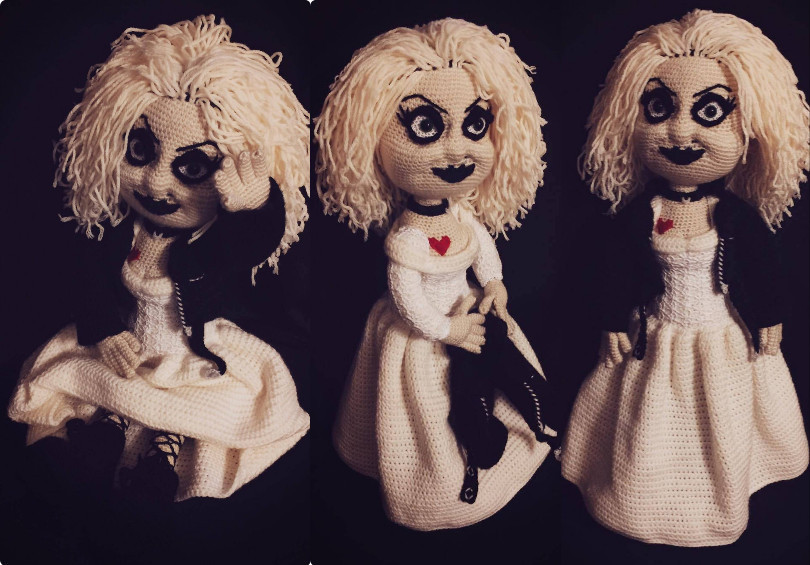 The next one is Pennywise the Dancing Clown.

Who doesn’t know this famous clown?

He is the star in Stephen King’s 1986 horror novel It. The character is an ancient cosmic evil that preys upon the children of Derry, Maine, roughly every 27 years, using a variety of powers that include the ability to shapeshift, manipulate reality, and go unnoticed by adults.

During the story, It primarily appears in the form of Pennywise the Dancing Clown.

In a 2013 interview, King stated that he came up with the idea for Pennywise after asking himself what scared children “more than anything else in the world” and feeling that the answer was clowns. King thought of a troll like the one in the children’s tale “Three Billy Goats Gruff”, who inhabited a sewer system.

Get the pattern here, or click the photo below. 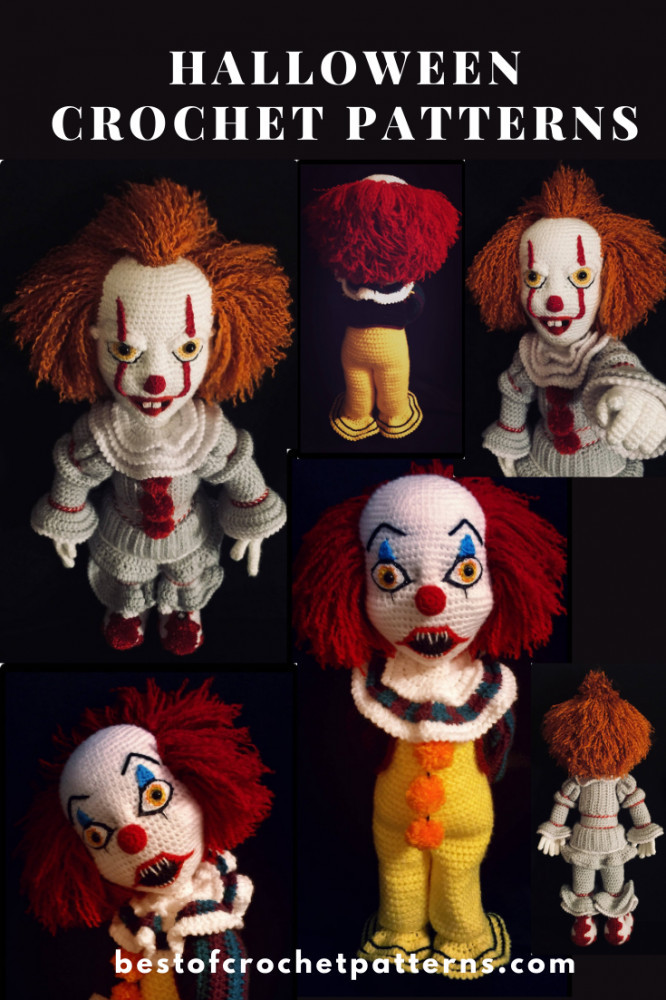 If you want to make a blanket or a pillow, you can find the free PDF Download pattern for C2C Blanket and a Tapestry Crochet Pillow here: Creepy Halloween Crochet Patterns.

The next Horror Movie Icon is Jason Voorhees.

Jason Voorhees is the main character from the Friday the 13th series. He first appeared in Friday the 13th (1980) as the young son of camp cook-turned-killer Mrs. Voorhees.

Jason was not originally intended to carry the series as the main antagonist. The character has subsequently been represented in various other media, including novels, video games, comic books, and a crossover film with another iconic horror film character, Freddy Krueger.

Get the pattern here or click the photo below. 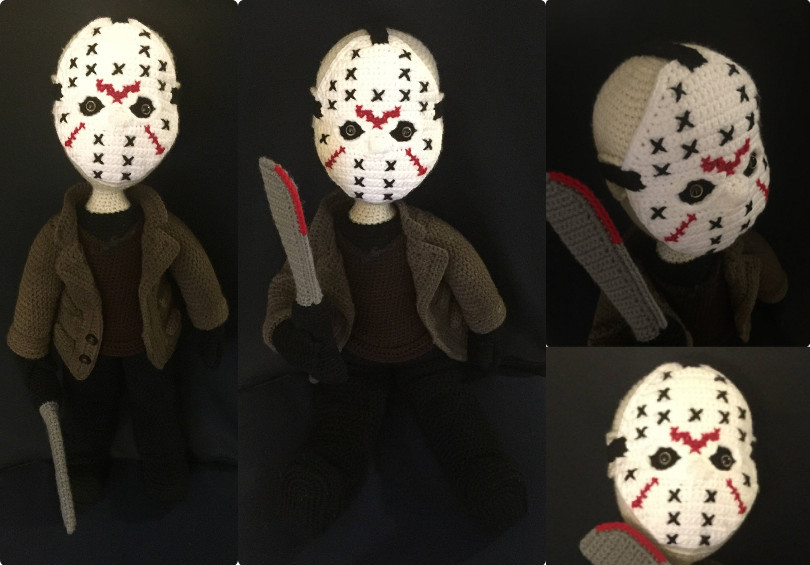 You guessed it; the next Horror movie Icon is Freddy Krueger.

In the dream world, he is a powerful force and almost completely invulnerable. However, whenever Freddy is pulled into the real world, he has normal human vulnerabilities and can be destroyed.

Get this creepy pattern here or the photo below. 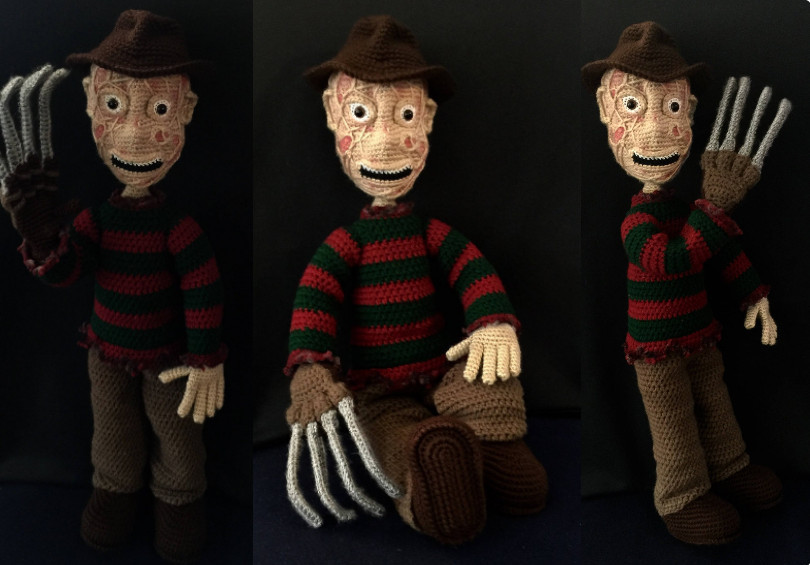 Another Horror movie legend is Leatherface.

Leatherface first appeared in The Texas Chain Saw Massacre (1974) as a cannibalistic and mentally unstable mass murderer who, alongside his family, kidnapped, murdered, and subsequently cooked unsuspecting travelers.

The character’s name comes from the skin masks he is always wearing, which hide his deformed face and are made from his victims’ faces. Leatherface’s signature weapon is a chainsaw, though he has used other weapons to murder his victims.

Wisconsin murderer Ed Gein, who also wore masks made of human skin, was reportedly the inspiration for Leatherface and other original film elements. 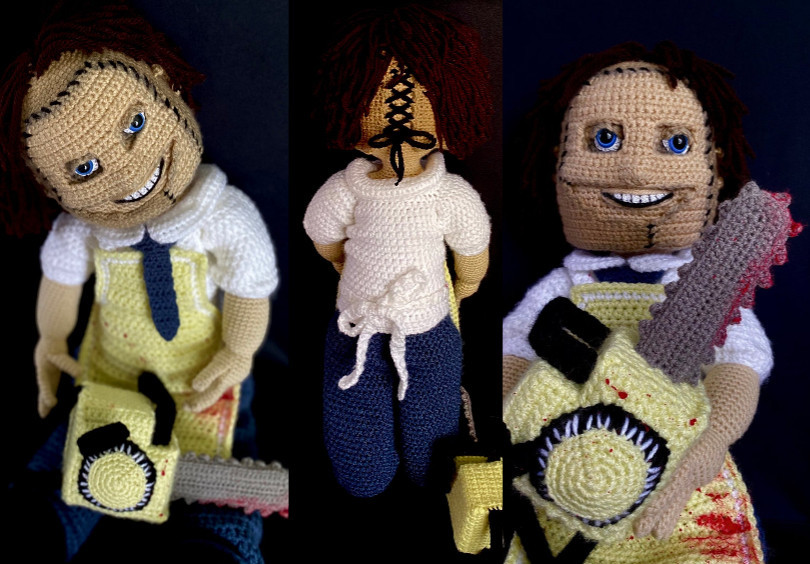 Pinhead is a fictional character and the Hellraiser franchise’s main antagonist, first appearing as an unnamed figure in the Clive Barker novella The Hellbound Heart.

The name “Pinhead” is derived from a nickname given to him by the crew of the first Hellraiser film; he is first credited as such in Hellbound: Hellraiser II. Nearly thirty years after The Hellbound Heart was published, the character was given the designations the Hell Priest and the Cold Man in the sequels that followed, The Scarlet Gospels and Hellraiser: The Toll.

Pinhead is one of the Cenobites’ leaders, formerly humans but transformed into creatures that reside in an extradimensional realm, who travel to Earth through a puzzle box called the Lament Configuration to harvest human souls.

His origins and the nature of the Cenobites vary depending upon the medium. While the character began as an amoral entity blindly devoted to the practice of experimental sadomasochism, later depictions have portrayed him as explicitly evil and even demonic in origin.

To get the pattern click here or the photo. 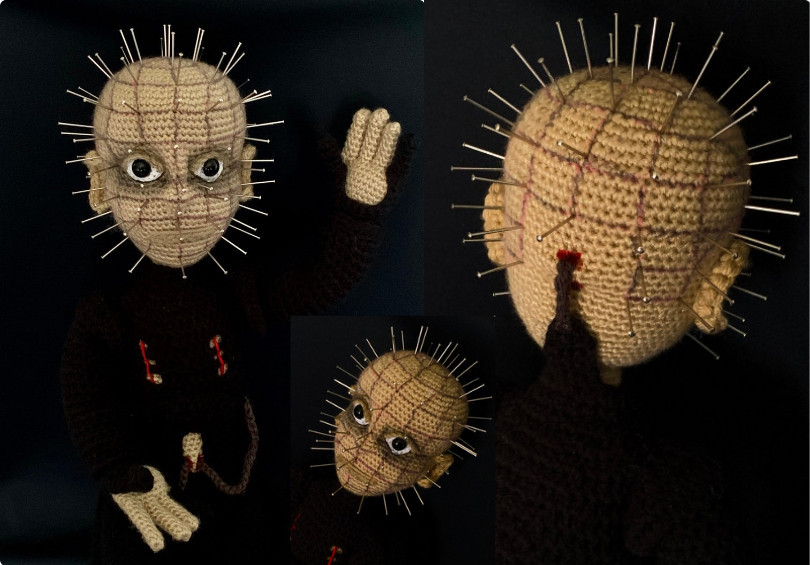 And the last I want to show you is also one of the most famous killers, Michael Myers.

Michael Myers is a fictional character from the Halloween series of slasher films. He first appears in 1978 in John Carpenter’s Halloween as a young boy who murders his elder sister, Judith Myers. Fifteen years later, he returns home to Haddonfield to murder more teenagers.

The character was created by Debra Hill and John Carpenter and has appeared in ten films, as well as novels, multiple video games, and several comic books.

In the first two films, Michael wears a Captain Kirk mask that is painted white. The mask, which was made from a cast of William Shatner’s face, was originally used in the 1975 horror film The Devil’s Rain.

To get his amazing pattern, click here or the photo below. 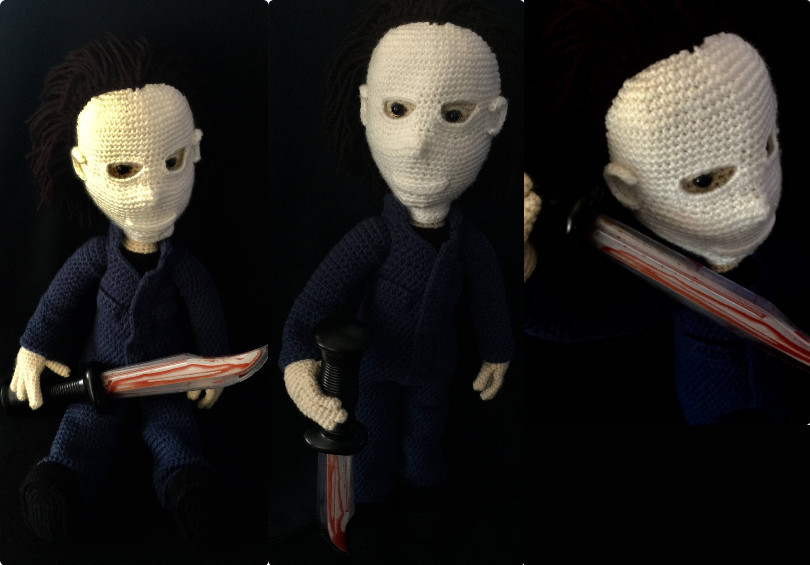 Visit the AfterDarkCrochet Etsy shop to see the other patterns too. As you can see from the pictures above, they are creepy and unforgettable. 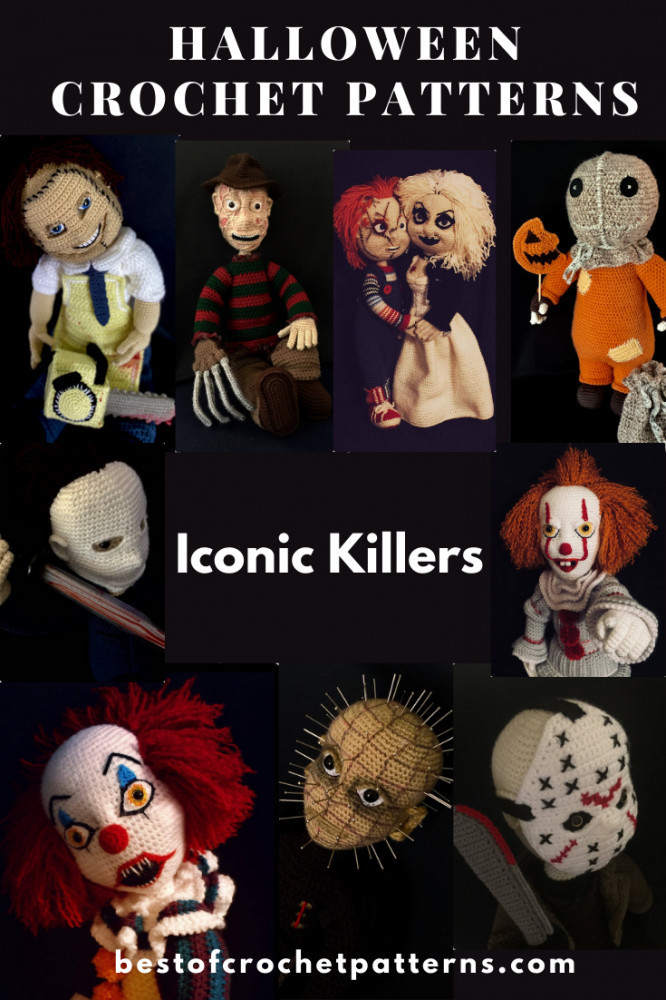