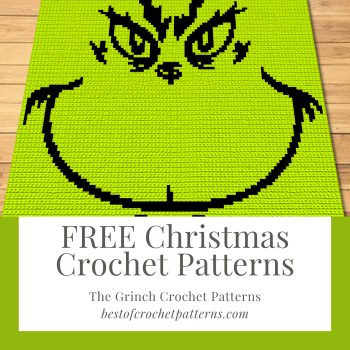 Each year, millions of Americans welcome the holiday season by tuning into their favorite TV specials. This includes at least one viewing of the 1966 animated classic How the Grinch Stole Christmas. Adapted from Dr. Seuss’s equally famous children’s book by legendary animator Chuck Jones, How the Grinch Stole Christmas first aired more than 50 years ago, on December 18, 1966.

Dr. Seuss was a beloved children’s book author. Thirty years after his death, his books are still classics for children worldwide.

The Grinch is a fictional character created by Dr. Seuss. He is best known as the main character of the 1957 children’s book How the Grinch Stole Christmas!. Many different actors have portrayed and voiced him, including Boris Karloff, Hans Conried, Bob Holt, Anthony Asbury, Jim Carrey, and Benedict Cumberbatch. 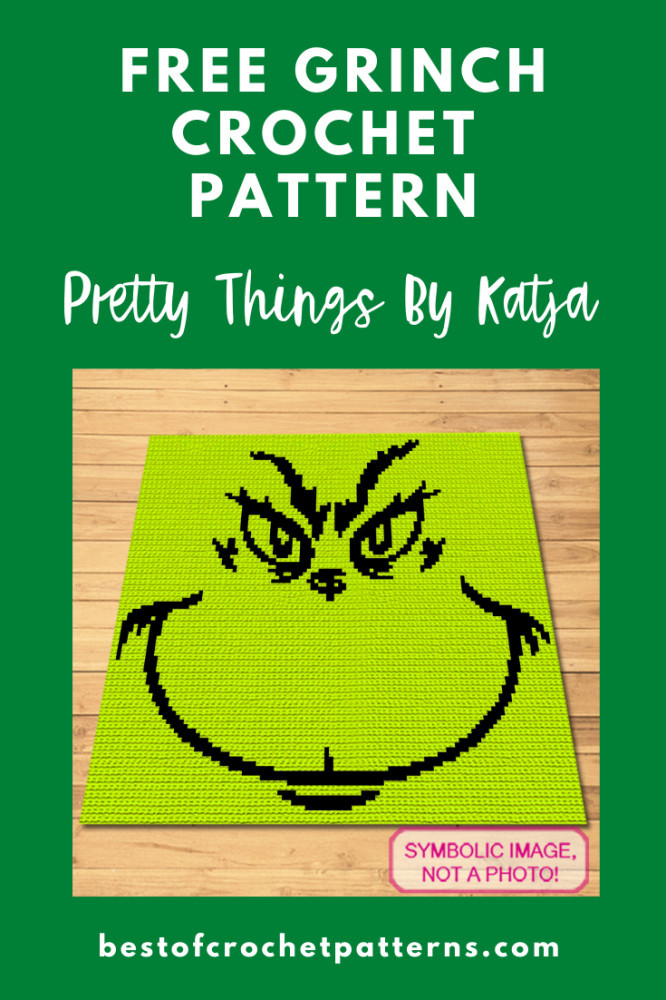 The Grinch is depicted as a hairy, pot-bellied, pear-shaped, snub-nosed creature with a cat-like face and cynical personality. In full-color adaptations, he is typically colored avocado green.

In the original book, the Grinch is illustrated as black and white, with hints of pink and red. Rumor has it that Jones was inspired to give the Grinch his iconic coloring after renting a car painted an ugly shade of green.

Grinch has spent the past 53 years living in seclusion on a cliff overlooking the town of Whoville. In contrast to the cheerful Whos, the Grinch is misanthropic and mean-tempered.

According to Theodor Geisel’s 1957 children’s story, How the Grinch Stole Christmas!, no one really knows the reason behind why the Grinch hates Christmas, although the narrator has a few guesses:

Grinch especially hates the Christmas season, making particular note of how disturbing the various noises of Christmas time are to him, including the singing of Christmas carols. Finally, unable to stand the holiday any longer, he decides to destroy it once and for all.

Aided by his pet dog, Max, he disguises himself as Santa Claus and breaks into the Whos’ homes to steal everything they own and dump it off a nearby mountain. Although he pulls off the theft successfully, he is shocked to hear the Whos still singing cheerfully, happy simply to have each other on Christmas morning.

He then realizes that the holiday has a deeper meaning that he never considered. Inspired, he stops the Whos’ belongings from falling off the edge of the mountain, and in the process (according to those who speculated upon the size of his heart before), his heart grows three sizes. He returns all the gifts he stole and gladly takes part in the Whos’ Christmas celebration.

The Grinch is still portrayed as a bitter and ill-tempered character in artwork or other media. However, in both the animated TV special and the 2000 live-action film, he is shown to have superhuman strength when he stops an entire sleigh loaded with presents from going over a cliff and lifts it over his head. He is also described as “[finding] the strength of ten Grinches plus two” (a phrase lifted from the original book) during that moment of crisis. In the 2018 film, the Grinch has assistance saving all the Whos’ stolen goods. 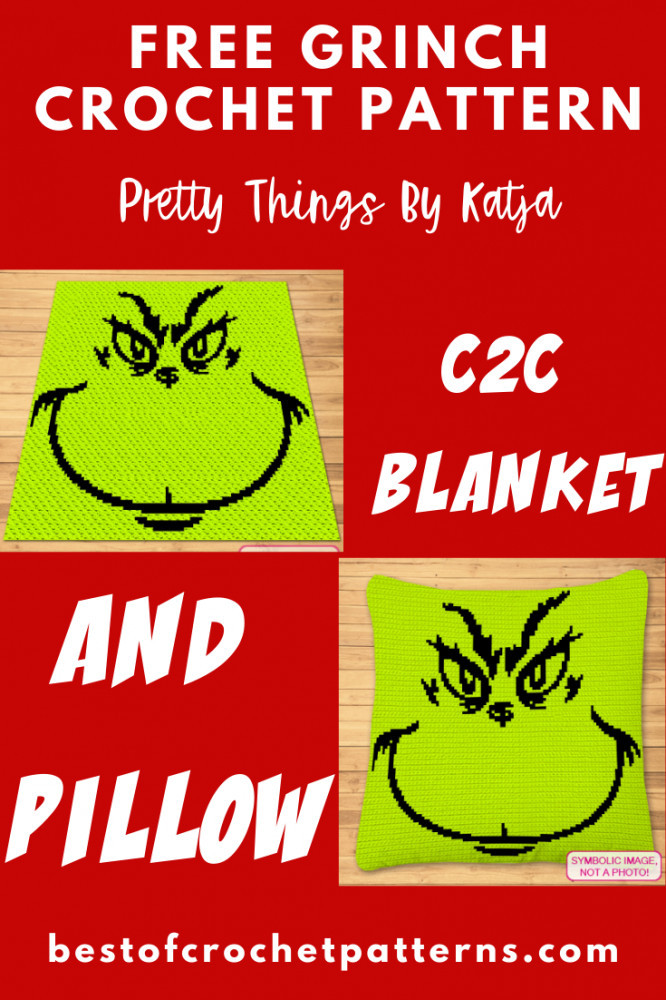 The Grinch has become an anti-icon of Christmas and the winter holidays, symbolizing those who despise the holiday. Over the years, the Grinch has appeared on various forms of memorabilia such as Christmas ornaments, plush dolls, and various clothing items.

The grumpy, anti-holiday spirit of the character has led to the everyday term “Grinch” coming to refer to a person opposed to Christmas time celebrations or someone with a coarse, greedy attitude.

In 2002, TV Guide ranked The Grinch number 5 on its “50 Greatest Cartoon Characters of All Time” list.

Here is a C2C Blanket Pattern (Just click on the link or the photo below): 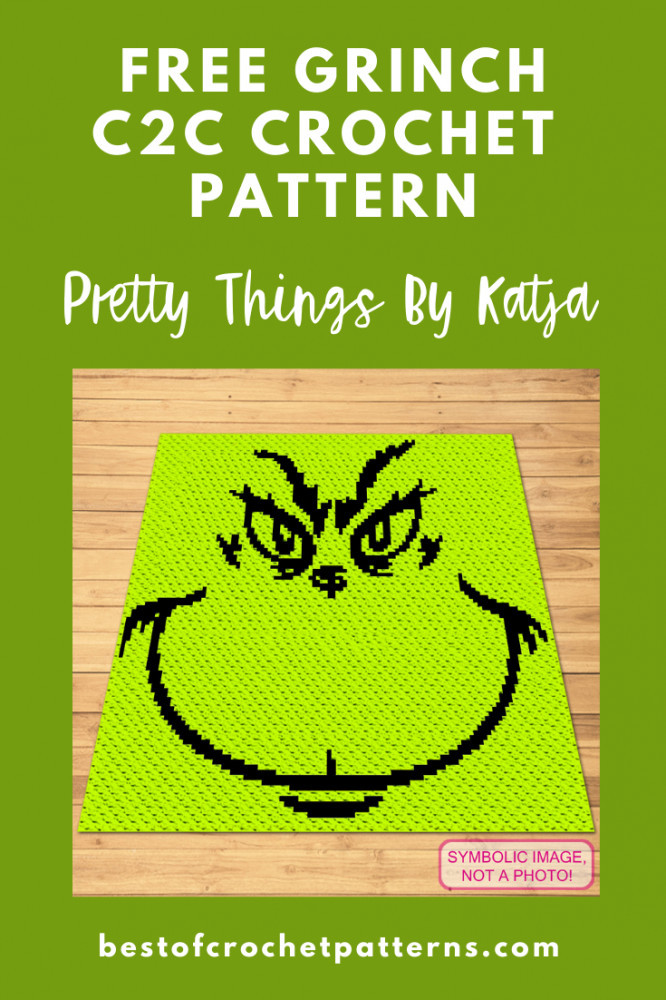 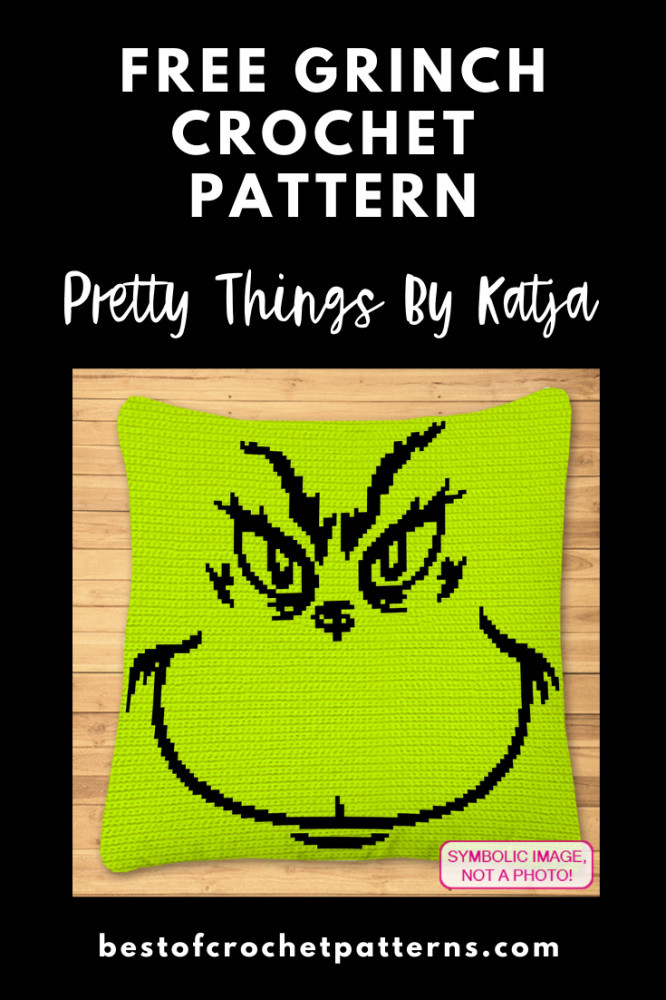 And if you like this Pattern, you can check out my Etsy Shop Pretty Things By Katja and find more Christmas Patterns here. You can use the code: BESTOFCROCHET and get 20% off. 😉

But if you join my Email List you get a Coupon for 50% off and free patterns directly to your inbox. 🙂 So Sign up now!

The Grinch serves as an allegory for both children and adults to be reminded about the real meaning behind the winter holiday that comes at the close of every year. While you can get a lot of joy out of giving and receiving physical gifts, the greatest and most precious gift of all is getting to spend time with those you love. So, next time you get caught up in the hustle and bustle of holiday shopping, think about the Grinch and the true meaning of Christmas.

Thank you for reading my blog.