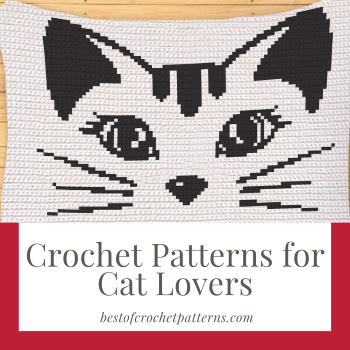 If you are looking for a gift for someone who loves cats, you will get some cute ideas today. I want to show you a few of my Cat Crochet Patterns that I think you will love.

Are you a cat person or a dog person? If you are a cat person, I will show you some great blanket and pillow patterns to make. And if you are a dog person, don’t worry, Crochet patterns for dog lovers post is coming soon. But you can already find some really cute animal patterns in my Etsy Shop, Pretty Things By Katja, so click on the link and check it out.

You can use the discount code: BESTOFCROCHET and get 20% off on all of my patterns. I am adding new designs daily, so make sure you add my shop to your favorites and get notified when I have a Sale.

There’s still so much that we don’t know about cats. From the unusual way they walk to how big the largest cat is, I bet you haven’t heard some of these fun facts! 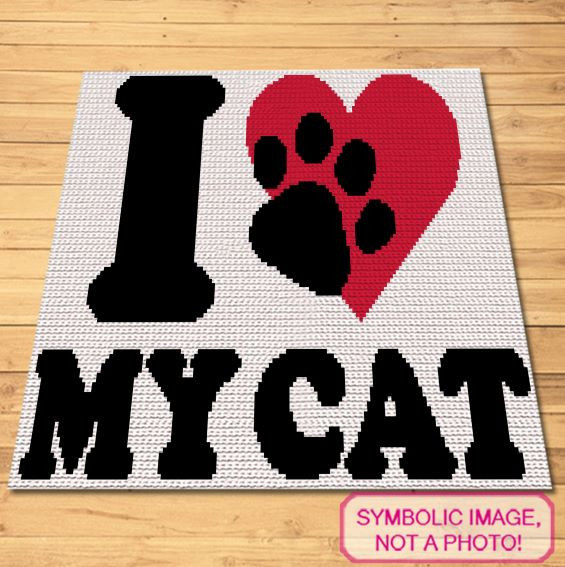 In America, most people have a pet. There are more pets than children. About 90 percent (some polls indicate over 90 percent) of pet owners consider their pets members of the family. Yet, according to the ASPCA, approximately 2.7 million animals are euthanized at shelters each year (1.2 million dogs and 1.4 million cats).

According to Live Science (and others), 2013, the most popular pets in the world:

You may love your cat, but you may not be fully aware of just how cool her species really is. For example, did you know that cats have an extra organ that allows them to taste scents? Or that they developed meowing as a way to communicate exclusively with humans? 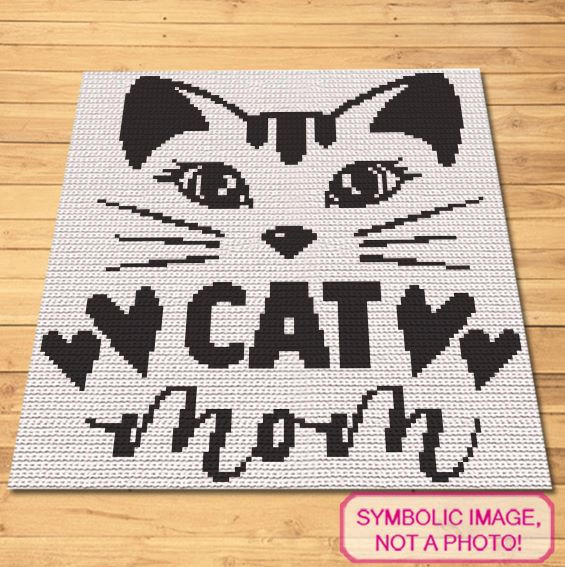 I have pulled together a list of the most amusing cat facts that you can share with your friends and family.

Female cats have the ability to get pregnant when they are only 4 months old! A cat can have as many as 12 kittens in just one year.

If they aren’t neutered or spayed, one female cat and her offspring can produce up to 420,000 more cats in seven years.
3.2 million cats enter animal shelters every year, and approximately 860,000 cats are euthanized every year.

Kittens can be spayed or neutered when they are only eight weeks old. If possible, these procedures should be performed in the first 5 months of your cat’s life.

Male cats who have been fixed need fewer calories to maintain their weight.

Despite popular belief, many cats are actually lactose intolerant. Grapes and raisins, as well as onions, garlic, and chives, are all extremely harmful foods for cats. Grapes and raisins can cause kidney failure — although the reasoning behind that isn’t clear. Meanwhile, onions, garlic, and chives wreak havoc on your cat’s gastrointestinal system and can cause anemia.

Cats are responsible for the decline of 27 mammal species. Outdoor cats are believed to be the biggest human-caused threat to wildlife, impacting the reduction or extinction of 123 bird species on islands, ranging from songbirds to penguins. Stray and feral cat stats also show that they have contributed to the decline in the number of 25 species of reptiles. 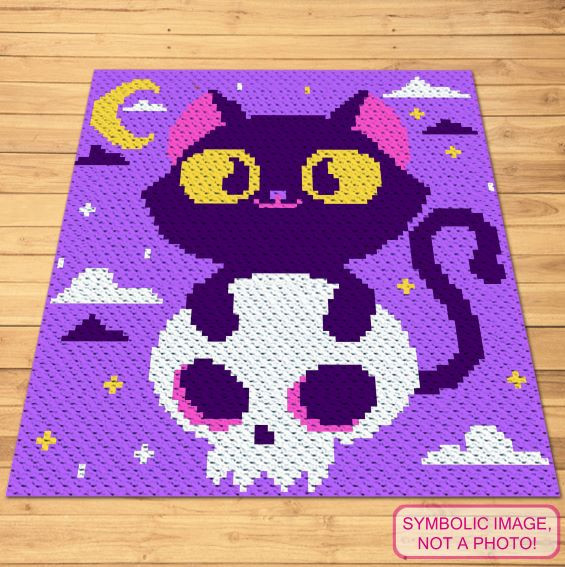 When it comes to one of the world’s most popular pets, what can we learn from the cat statistics that we don’t already know? A lot, it turns out. Cats are mysterious creatures that never cease to amaze us. Maybe that’s one of the reasons humans love them so much.

Did any of these facts surprise you? There’s a reason the cat statistics show that felines are one of the most popular pets in the world. From ruling the Internet to simply running the house, cats have managed to capture the hearts of everyone who comes into contact with them.

As I mentioned, I want to introduce to you my Crochet Patterns for Cat Lovers. You have seen some of them in the photos above, and now, here they are:

All my C2C and Tapestry Crochet patterns include:

And if you are a left-handed crocheter, don’t worry, send me a message, and I will make you a left-handed pattern for no additional charge.

The first one is one of my most popular ones: Life is better with cats.

After reading all the statistics, who wouldn’t agree.

To get to the pattern, click on the link or the photo below. 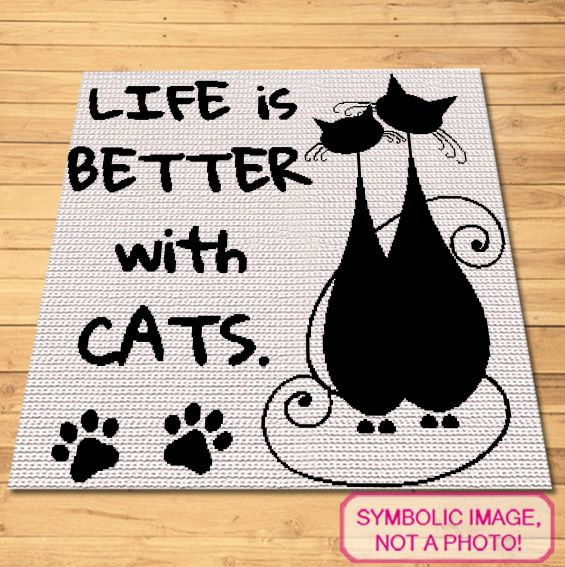 And if you have only one cat, maybe you would like this pattern better: Life is better with a cat.

To buy it, click on the link or the photo below. 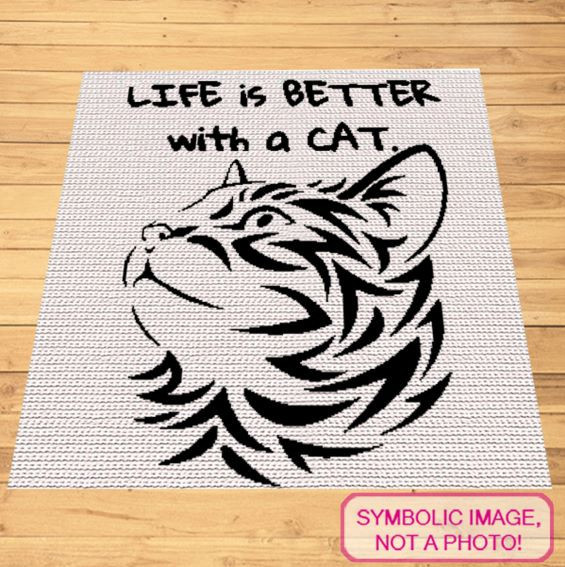 Next, Crochet Cat Pattern is a C2C Crochet Blanket Pattern and a Tapestry Crochet Pillow Pattern.

I woke up this purrfect. <3 They are perfect, aren’t they?

Who wouldn’t love a blanket or a pillow like this? To get it, click on the link or photo below. 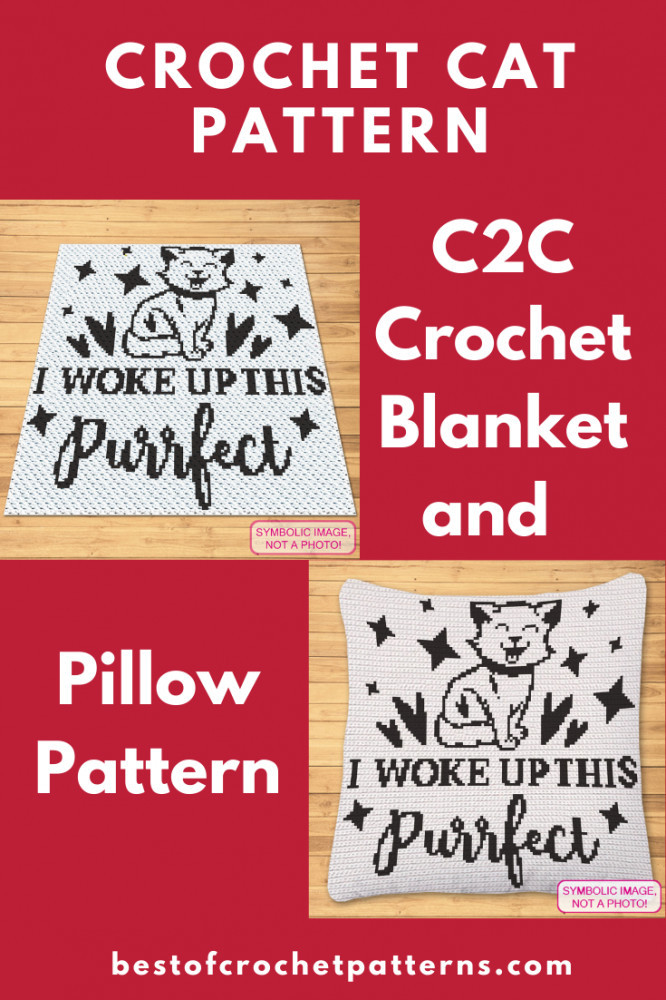 A perfect gift for a Cat Mom.

Crochet Cat Blanket And Pillow Pattern is a Graph Pattern with Written Instructions, PDF Digital File. This is a Tapestry Crochet pattern.

If you don’t like the crochet blanket colors, you can change it to match your room or use your favorite colors. I recommend using a smaller hook and yarn for the pillow and a bigger one for the blanket.

To get this cute pattern, click here or the photo below. 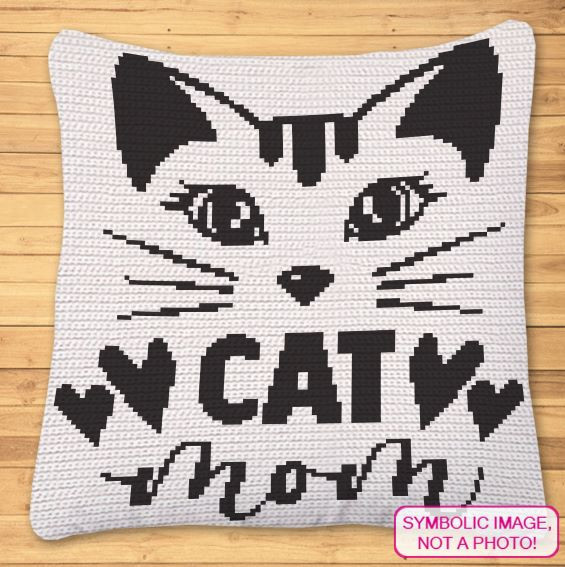 If cats could talk, they wouldn’t.

I don’t know about your cats, but mine certainly wouldn’t. At least during the day, but I am sure they would have a lot to tell me in the middle of the night.

This is a Tapestry Crochet Blanket Pattern, and you can get it here or click the photo below. 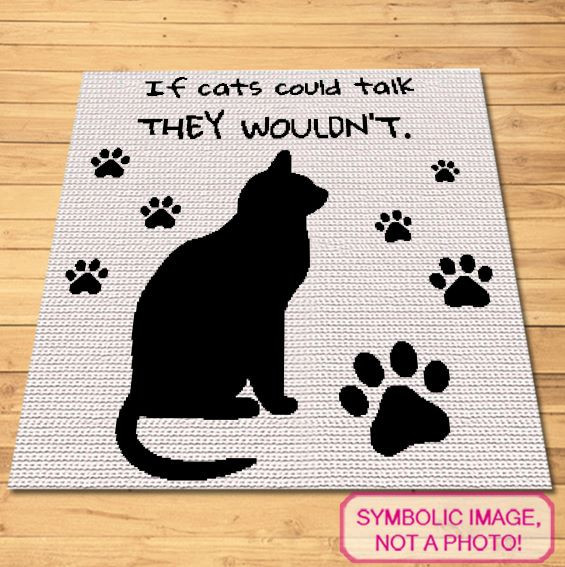 This Crochet Pattern includes C2C Graphgan Pattern, and Tapestry Crochet Blanket and Pillow Pattern. You can use the technique you like better.

To get it, click here or the photo below. 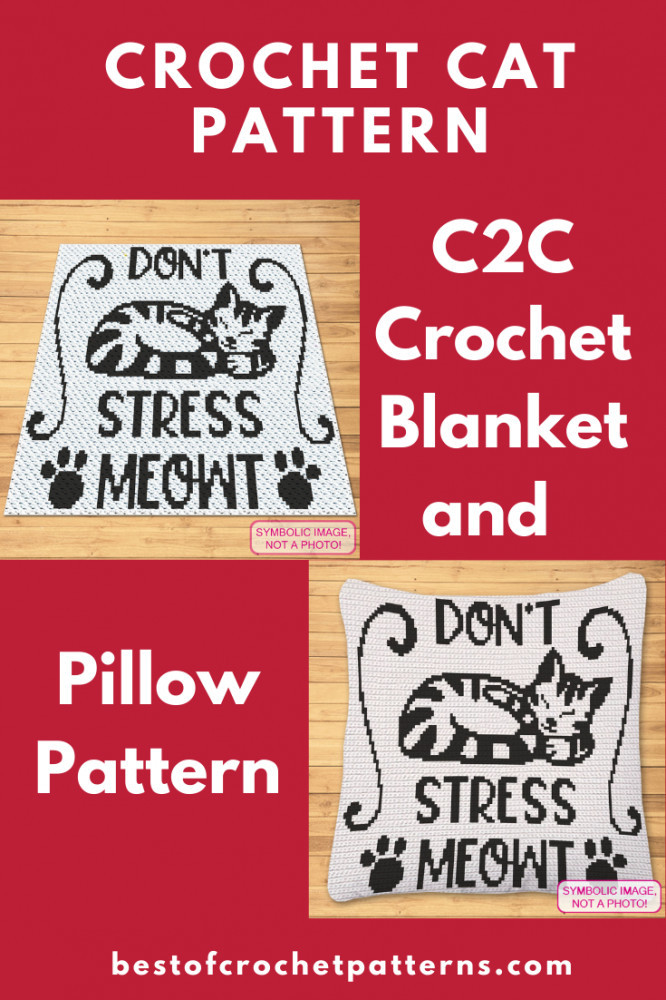 I couldn’t resist it; I had to make it.

In ancient times cats were worshiped as gods. They didn’t forget it. 🙂

This is a Tapestry Crochet Blanket Pattern, and you can get it here or click the photo below. 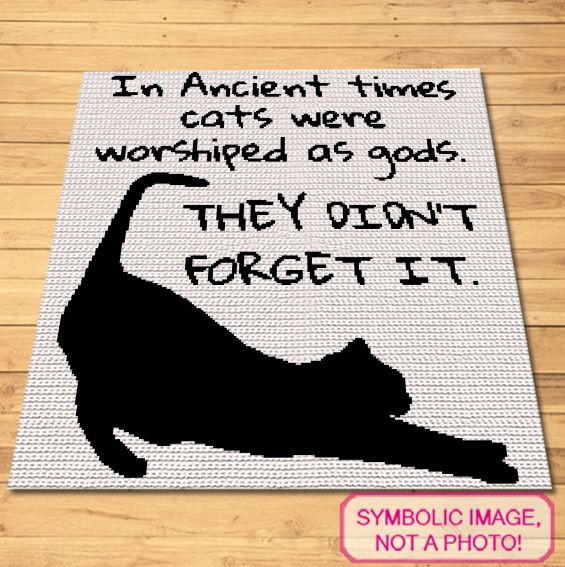 I love my Cat.

As I mentioned above, if you are a left-handed crocheter, don’t worry; I can make all of my written patterns into a left-handed version. Just contact me after you buy my pattern, and I will send it to you right away.

To get I love my Cat pattern, click here or the photo below. 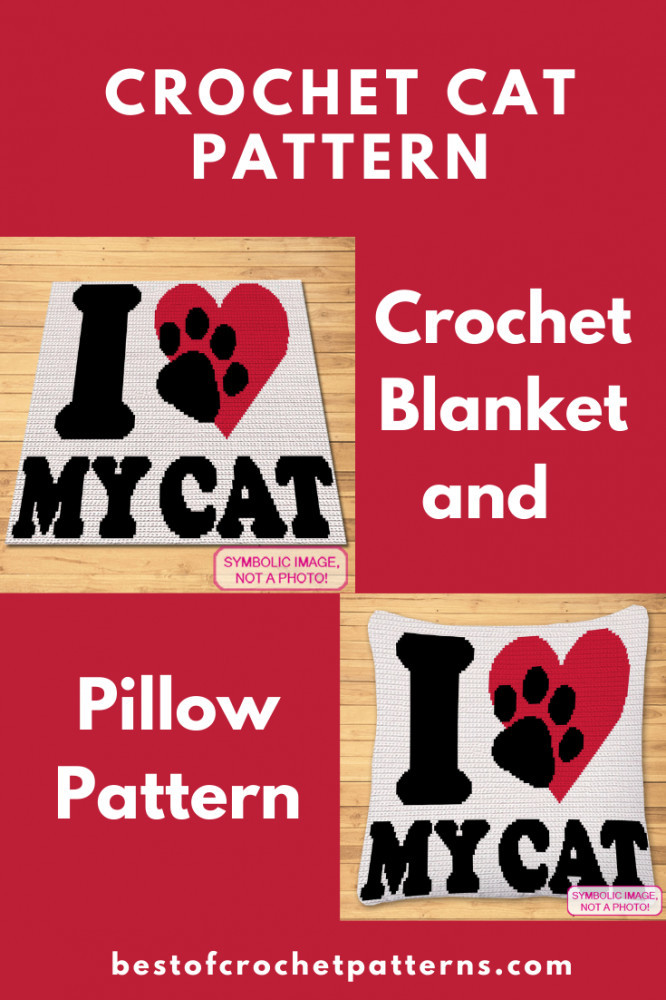 And the last one is this cute little Leopard pattern.

The Leopard Crochet Pattern combines Tapestry Crochet Blanket and Pillow Pattern. This afghan would be a fantastic birthday gift for an animal lover, and it could also be a lovely baby shower gift.

To get it, click here or the photo below. 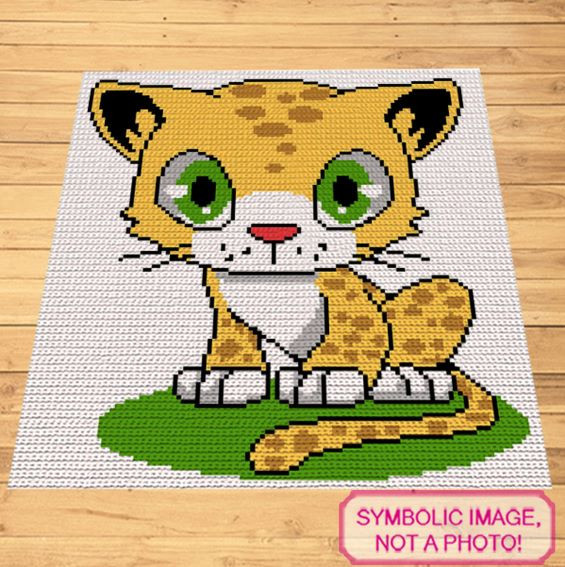 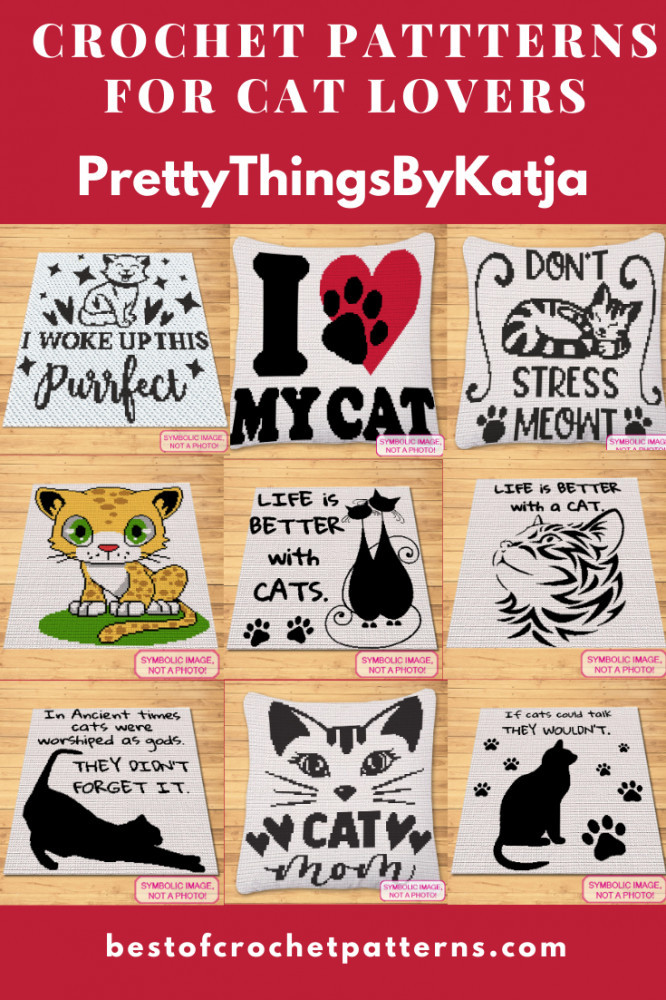 Just when we think we have them all figured out, they do something that takes us completely by surprise. Then again, perhaps it’s their cuddly and lovable nature. Whatever the reason, cats are awesome, and we love them!

Thank you very much for reading. Please, share with me in the comments below which fun fact surprised you the most. Here is the discount code again: BESTOFCROCHET and get 20% off all of my patterns.