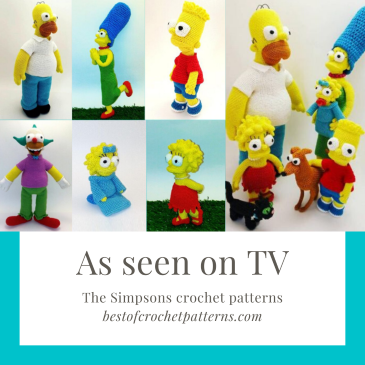 I decided I will do a series of As seen on TV crochet patterns. In my last post, I showed you The Office Crochet Patterns, and in this article, I will show you The Simpsons Crochet Patterns.

We probably all know The Simpsons. It is an American animated sitcom created by Matt Groening for the Fox Broadcasting Company. The series is a satirical depiction of working-class life, epitomized by the Simpson family, which consists of Homer, Marge, Bart, Lisa, and Maggie. The show is set in the fictional town of Springfield and parodies American culture and society, television, and the human condition. 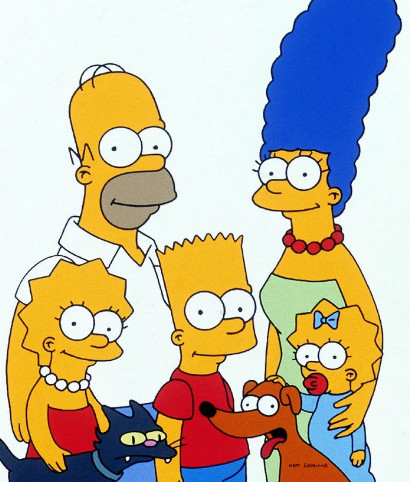 The Simpsons use a floating timeline in which the characters do not age or age very little, and as such, the show is always assumed to be set in the current year.

A feature-length film, The Simpsons Movie, was released in theaters worldwide in 2007 and grossed over $527 million. In the same year, a video game was released. The Simpsons were renewed in 2019 for a thirty-first and thirty-second season.

The Simpsons received acclaim throughout its first nine or ten seasons, which are generally considered its “Golden Age”. Time named it the 20th century’s best television series, and Erik Adams of The AV Club named it “television’s crowning achievement regardless of format”. On January 14, 2000, the Simpson family was awarded a star on the Hollywood Walk of Fame.

The show’s humor turns on cultural references that cover a broad spectrum of society so that viewers from all generations can enjoy the show. Such references, for example, come from movies, television, music, literature, science, and history.

I think that The Simpsons are so popular, because the animators also regularly add jokes or sight gags into the show’s background via humorous or incongruous bits of text in signs, newspapers, billboards, and elsewhere. The audience may often not notice the visual jokes in a single viewing. Some are so fleeting that they become apparent only by pausing a video recording of the show or viewing it in slow motion.

The Simpsons were the first successful animated program in American prime time since Wait Till Your Father Gets Home in the 1970s. During most of the 1980s, US pundits considered animated shows appropriate only for children, and animating a show was too expensive to achieve a quality suitable for primetime television. The Simpsons changed this perception.

Did you know all of these interesting facts about The Simpsons? Or did any of the surprise them?

I have found very realistic Crochet Patterns for the Simpsons family. The creator of all of them is Aleksandra Shevel from Yekaterinburg, Russia. You can find her crochet patterns in her Etsy shop Multyabra.

I will introduce the main characters, bellow. You can find a lot more in her shop, like Krusty The Clown, Sideshow Bob, and Itchy mouse (rat). 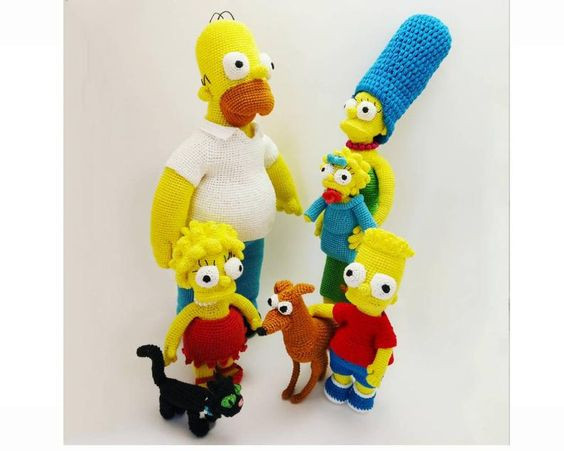 As the patriarch of the eponymous family, Homer and his wife Marge have three children: Bart, Lisa, and Maggie. As the family’s provider, he works at the Springfield Nuclear Power Plant as a safety inspector.

However, he often tries to be a good man and is staunchly protective of his family, especially when they need him the most. Despite the suburban life, he has had several remarkable experiences, including going to space, climbing the tallest mountain in Springfield by himself, fighting former President George H. W. Bush, and winning a Grammy Award as a member of a barbershop quartet.

Homer is one of the most influential characters in the history of television and is widely considered an American cultural icon. The British newspaper The Sunday Times described him as “The greatest comic creation of [modern] time”.

He was named the greatest character “of the last 20 years” in 2010 by Entertainment Weekly, was ranked the second-greatest cartoon character by TV Guide, behind Bugs Bunny.

Homer’s main and most famous catchphrase, the annoyed grunt “D’oh!”, is typically uttered when he injures himself, realizes that he has done something stupid, or when something terrible has happened or is about to happen to him.

“Son, if you really want something in this life, you have to work for it. Now quiet! They’re about to announce the lottery numbers.” 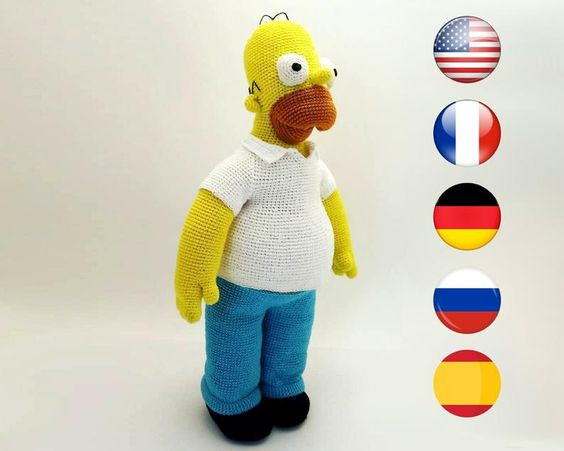 She is often portrayed as a stereotypical television mother and is often included on lists of top “TV moms”.

Marge was created and designed by cartoonist Matt Groening while he was waiting in the lobby of James L. Brooks’ office. Groening had been called to pitch a series of shorts based on Life in Hell but instead decided to create a new set of characters. He named the character after his mother, Margaret Groening.

Marge’s distinctive blue beehive hairstyle was inspired by a combination of the Bride’s in Bride of Frankenstein and the style that Margaret Groening wore in the 1960s.

Homer: Marge, will you marry me?

Marge: Why? Am I pregnant? 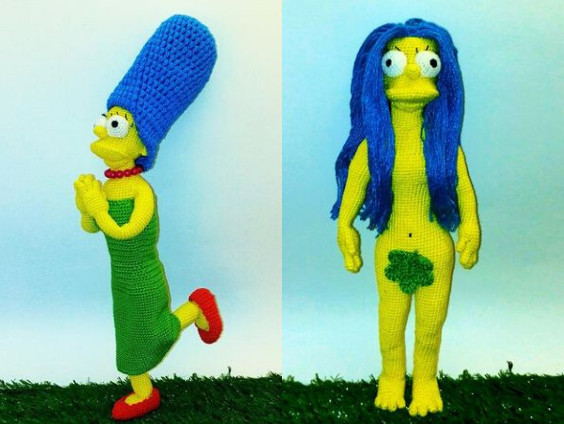 While the rest of the characters were named after Groening’s family members, Bart’s name is an anagram of the word brat.

At ten years old, Bart is the eldest child and only son of Homer and Marge, and the brother of Lisa and Maggie. Bart’s most prominent and popular character traits are his mischievousness, rebelliousness, and disrespect for authority.

The character’s hallmarks include his chalkboard gags in the opening sequence; his prank calls to Moe; and his catchphrases “Eat my shorts”, “¡Ay, caramba!“, “Don’t have a cow, man!”, and “I’m Bart Simpson. Who the hell are you?”. However, the exception of “Ay, caramba!”, these hallmarks have been retired or not often used.

During the first two seasons of The Simpsons, Bart was the show’s breakout character, and “Bartmania” ensued, spawning Bart Simpson’s rebellious attitude and pride at underachieving, which caused many parents and educators to cast him as a bad role model for children.

Around the third season, the series started to focus more on the family as a whole, though Bart remains a prominent character.

Time named Bart one of the 100 most important people of the 20th century, and he was named “entertainer of the year” in 1990 by Entertainment Weekly.

Bart has attended Springfield Elementary School for the duration of the series and has been in Edna Krabappel’s fourth-grade class. While he is too young to hold a full-time job, he has had occasional part-time jobs.

An uncaring teacher crushed his initial enthusiasm, and Marge became worried that something was truly wrong with Bart. One day during recess, Bart met Milhouse and started entertaining him and other students with various gestures and rude words. Principal Skinner told him, “you’ve just started school, and the path you choose now may be the one you follow for the rest of your life! Now, what do you say?” In his moment of truth, Bart responded, “eat my shorts”.

Bart commonly appears nude in the show, although in every case, only his buttocks are visible 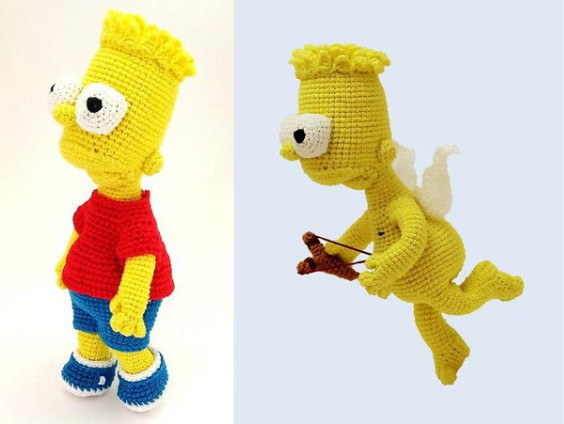 She is the middle child and most accomplished of the Simpson family. Intelligent, passionate, and the moral center of the family, Lisa Simpson, at eight years old.

Lisa’s high intellect and liberal political stance create a barrier between her and other children her age; therefore, she is a bit of a loner and social outcast.

Lisa is the most intellectual member of the Simpson family (she has an IQ of 159), and many episodes of the series focus on her fighting for various causes.

Lisa is a vegetarian, a strong environmentalist, a feminist, and a Buddhist. She is a supporter of gay rights and the Free Tibet movement.

In her free time, Lisa enjoys many hobbies, such as reading and playing the baritone saxophone.

Lisa was something of a “female Bart” who mirrored her brother’s mischief, but as the series progressed, she became a liberal voice of reason, which has drawn both praise and criticism from fans of the show.

TV Guide ranked her 11th (tied with Bart) on their list of the “Top 50 Greatest Cartoon Characters of All Time”. Her environmentalism has been exceptionally well received; several episodes featuring her have won Genesis and Environmental Media Awards.

Jonathan Gray, the author of the book Watching The Simpsons, feels that Lisa “is probably the best and certainly longest-running feminist character that television has had. She’s the heart of the show, and she quite often questions gender politics.”

According to PETA, Lisa was one of the first vegetarian characters on primetime television. In 2004 the organization included Lisa on its list of the “Most Animal-Friendly TV Characters of All Time”.

In 2008, the environmentalist website The Daily Green honored Lisa’s role in The Simpsons Movie with one of its inaugural “Heart of Green” awards, which “recognize those who have helped green go mainstream.” They wrote, “young Lisa Simpson has inspired a generation to wear their hearts on their sleeves and get educated, and involved, about global issues, from justice to feminism and the environment.”

“Don’t You Think We Ought To Attack The Roots Of Our Social Problems Instead Of Jamming People Into Overcrowded Prisons?” 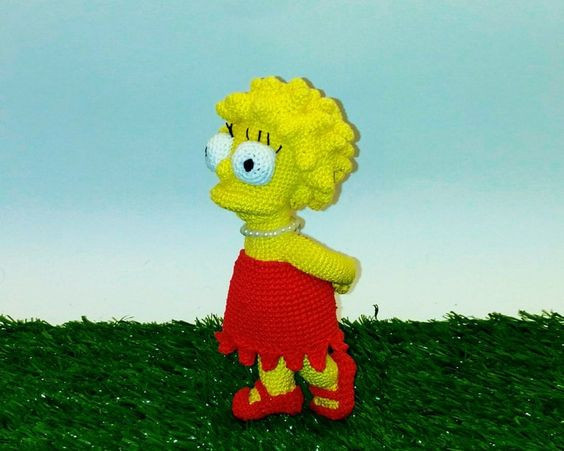 Maggie is the youngest child of Homer and Marge, and sister to Bart and Lisa. She is often seen sucking on her red pacifier, and when she walks, she trips over her clothing and falls on her face (this running gag is used much more in earlier seasons).

Being an infant, she has not learned how to talk. However, she did appear to speak in the first Tracey Ullman Show short.

Maggie has performed several feats that suggest she is highly intelligent, akin to her sister, and possibly a genius. She has spelled out E=MC² with her baby blocks, driven Homer’s car, escaped from the Springfield daycare center, written her name on an Etch A Sketch, played Internet poker, spelled words with her baby blocks, played Lisa’s saxophone, and treated her pacifier like a cigarette.

However, the rest of the Simpsons family are unaware of Maggie’s maturity, and Marge carries Maggie wherever they go rather than letting her walk by herself. Maggie is keenly aware of her surroundings and can imitate the flow of action around her. 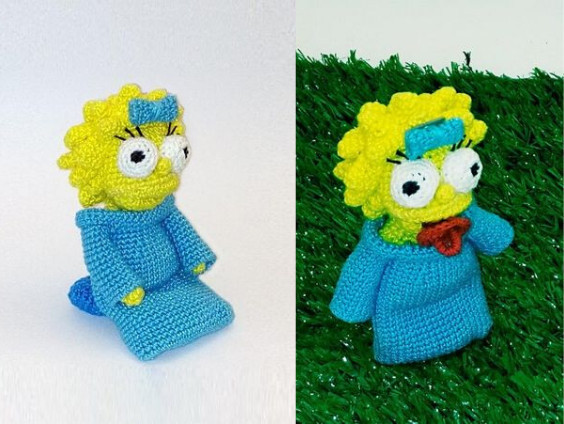 If you like to crochet blankets more that amigurumi, I have found The Simpsons Blanket Crochet Pattern form WhiskeyRebelsGraphs on Etsy. To get to the pattern, click on the photo. 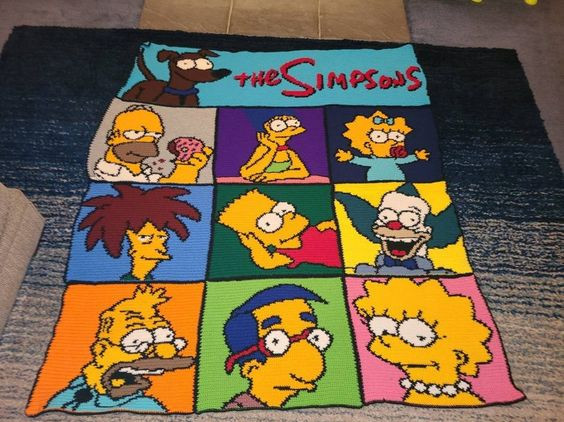 I hope you enjoyed a little trivia about The Simpsons, and I hope this article wasn’t too much of a spoiler for you. Which character do you like the most? Please, share with me in the comments below.

My favorite is Lisa Simpson. 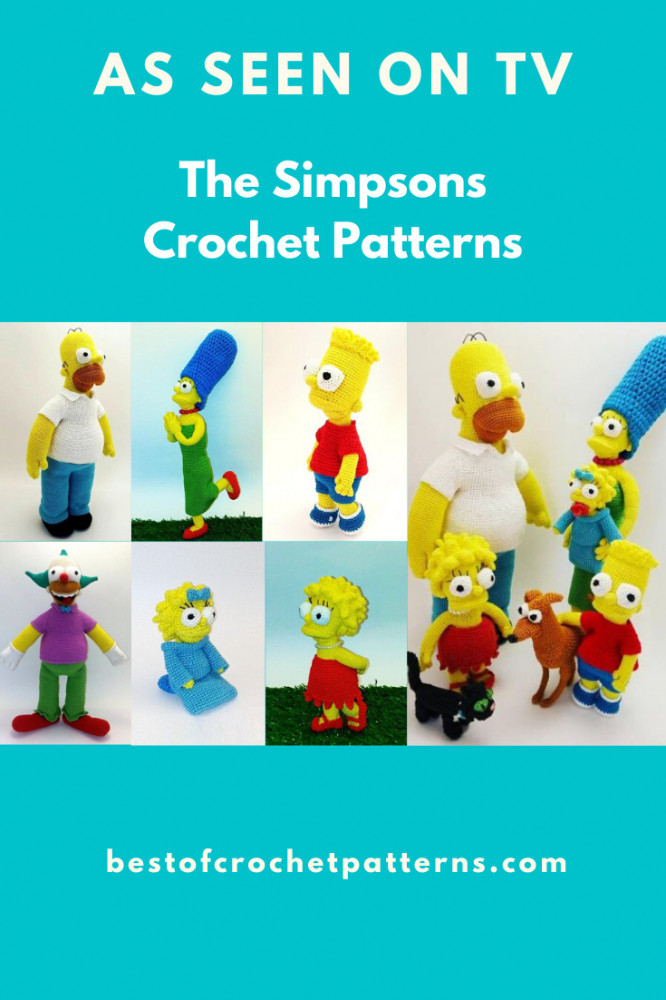