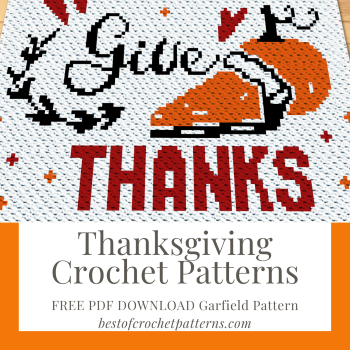 You can find some of my Fall Crochet Patterns – Crochet Afghan and Pillow Pattern here. Right now (November 2020), you can find them 30% off, so take advantage of this great offer soon.

I am from Slovenia, and I must admit I have heard about Thanksgiving many times, but I never read exactly what was the story behind the holiday. I have learned today, and I wanted to share some of the information with you. Maybe you will learn something new too. 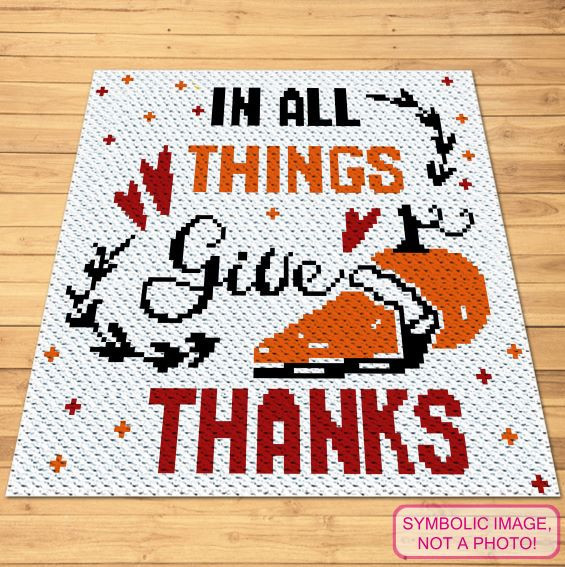 It began as a day of giving thanks and sacrifice for the blessing of the harvest and of the preceding year. Similarly named festival holidays occur in Germany and Japan. Thanksgiving is celebrated on the second Monday of October in Canada and on the fourth Thursday of November in the United States and Brazil, and around the same part of the year in other places. Although Thanksgiving has historical roots in religious and cultural traditions, it has long been celebrated as a secular holiday.

Thanksgiving, which occurs on Thursday, November 26, 2020, is based on the colonial Pilgrims’ 1621 harvest meal. For more than two centuries, days of Thanksgiving were celebrated by individual colonies and states. It wasn’t until 1863, in the midst of the Civil War, that President Abraham Lincoln proclaimed a national Thanksgiving Day to be held each November. 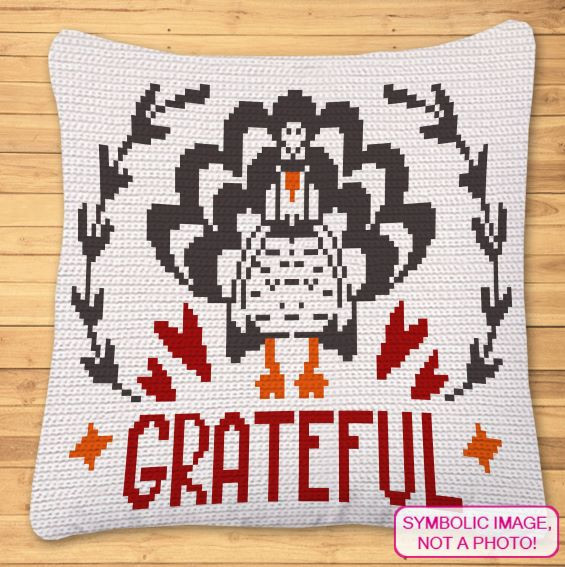 In September 1620, a small ship called the Mayflower left Plymouth, England, carrying 102 passengers—an assortment of religious separatists seeking a new home where they could freely practice their faith and other individuals lured by the promise of prosperity and land ownership in the New World.

After a treacherous and uncomfortable crossing that lasted 66 days, they dropped anchor near the tip of Cape Cod, far north of their intended destination at the mouth of the Hudson River. One month later, the Mayflower crossed Massachusetts Bay, where the Pilgrims, as they are now commonly known, began establishing a village at Plymouth.

Throughout that first brutal winter, most of the colonists remained on board the ship, where they suffered from exposure, scurvy, and outbreaks of contagious disease. Only half of the Mayflower’s original passengers and crew lived to see their first New England spring.

In March, the remaining settlers moved ashore, where they received an astonishing visit from an Abenaki Native American who greeted them in English.

Several days later, he returned with another Native American, Squanto, a member of the Pawtuxet tribe who had been kidnapped by an English sea captain and sold into slavery before escaping to London and returning to his homeland on an exploratory expedition.

Squanto taught the Pilgrims, weakened by malnutrition and illness, how to cultivate corn, extract sap from maple trees, catch fish in the rivers and avoid poisonous plants. He also helped the settlers ally with the Wampanoag. This local tribe would endure for more than 50 years and tragically remains one of the only examples of harmony between European colonists and Native Americans. 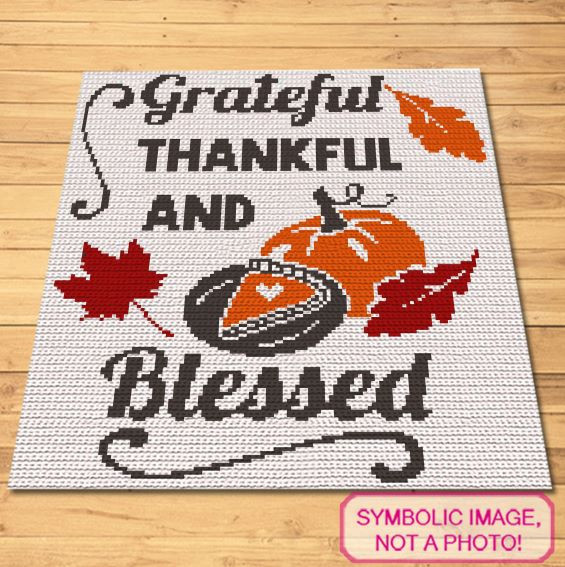 In many American households, the Thanksgiving celebration has lost much of its original religious significance; instead, it now centers on cooking and sharing a bountiful meal with family and friends.

As the country became more urban and family members began to live farther apart, Thanksgiving became a time to gather together. The holiday moved away from its religious roots to allow immigrants of every background to participate in a common tradition.

The American holiday is incredibly rich in legend and symbolism, and the traditional fare of the Thanksgiving meal typically includes turkey, bread stuffing, potatoes, cranberries, and pumpkin pie.

Turkey, a Thanksgiving staple so ubiquitous it has become all but synonymous with the holiday, may or may not have been on offer when the Pilgrims hosted the inaugural feast in 1621. Today, however, nearly 90 percent of Americans eat the bird—whether roasted, baked, or deep-fried—on Thanksgiving, according to the National Turkey Federation. 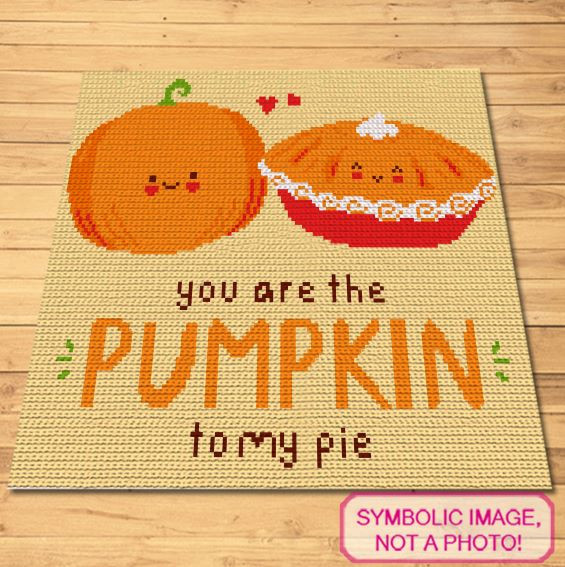 Parades have also become an integral part of the holiday in cities and towns across the United States. Presented by Macy’s department store since 1924, New York City’s Thanksgiving Day parade is the largest and most famous, attracting some 2 to 3 million spectators along its 2.5-mile route and drawing an enormous television audience. It typically features marching bands, performers, elaborate floats conveying various celebrities, and giant balloons shaped like cartoon characters.

Beginning in the mid-20th century and perhaps even earlier, the United States president has “pardoned” one or two Thanksgiving turkeys each year, sparing the birds from slaughter and sending them to a farm for retirement. A number of U.S. governors also perform the annual turkey pardoning ritual.

Thanksgiving Day football games, beginning with Yale versus Princeton in 1876, enabled fans to add some rowdiness to the holiday. 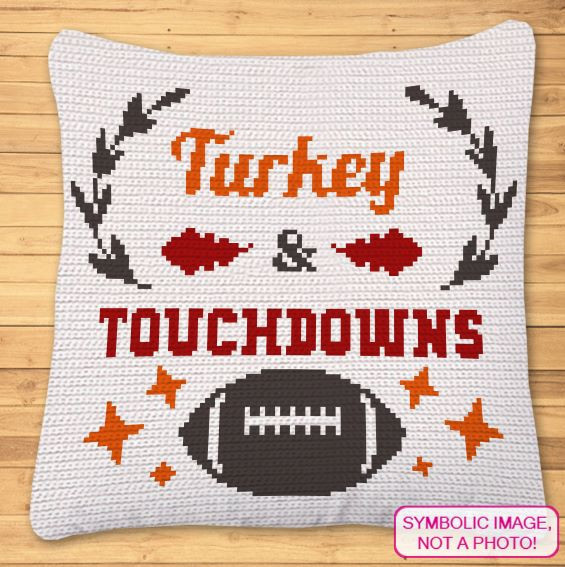 The holiday associated with Pilgrims and Native Americans has come to symbolize intercultural peace, America’s opportunity for newcomers, and the sanctity of home and family.

Thanksgiving continues to be a day for Americans to gather for a day of feasting, football, and family.

In Canada, days of Thanksgiving also originated in the colonial period, arising from the same European traditions, in gratitude for safe journeys, peace, and bountiful harvests. The earliest celebration was held in 1578 when an expedition led by Martin Frobisher held a ceremony in present-day Nunavut to give thanks for its fleet’s safety.

In 1879 Parliament established a national Thanksgiving Day on November 6; the date has varied over the years. Since 1957 Thanksgiving Day has been celebrated in Canada on the second Monday in October. 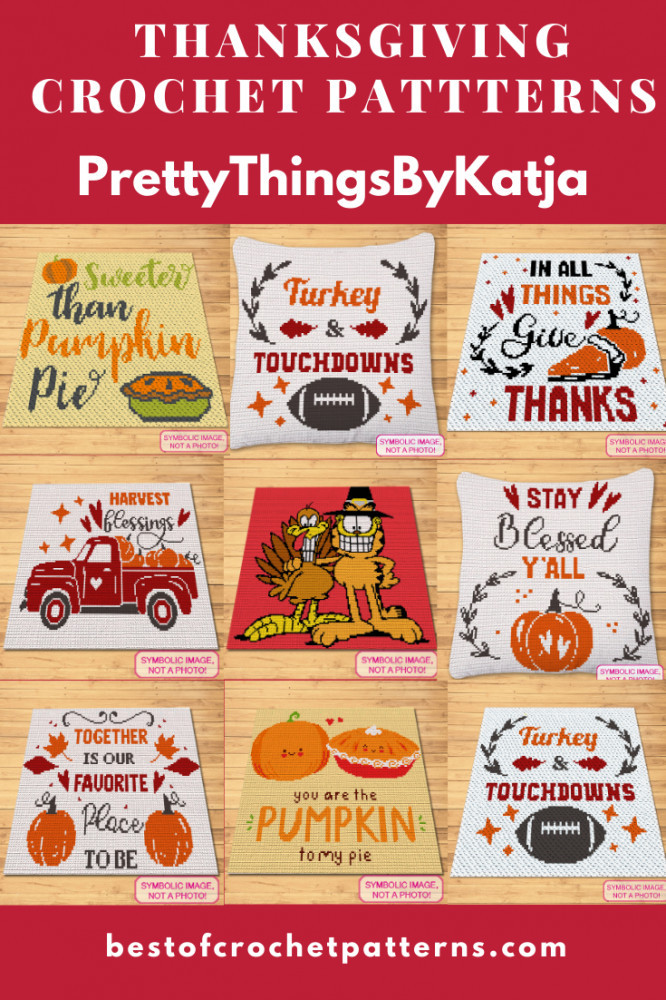 Have you learned anything new? Did any of the facts surprise you? Please share with me in the comments below.

I did not know that they celebrate Thanksgiving in so many Countries.

Here are some of Thanksgiving Crochet Patterns from my Etsy shop, Pretty Things By Katja. You could already see some of them above.

The first pattern I want to show you is the Happy Harvest Blanket and Pillow pattern.

You had the chance to get this pattern for free on my 5K Giveaway on Instagram (@Pretty_things_by_katja).

You can get this Tapestry crochet pattern here or click on the photo below. 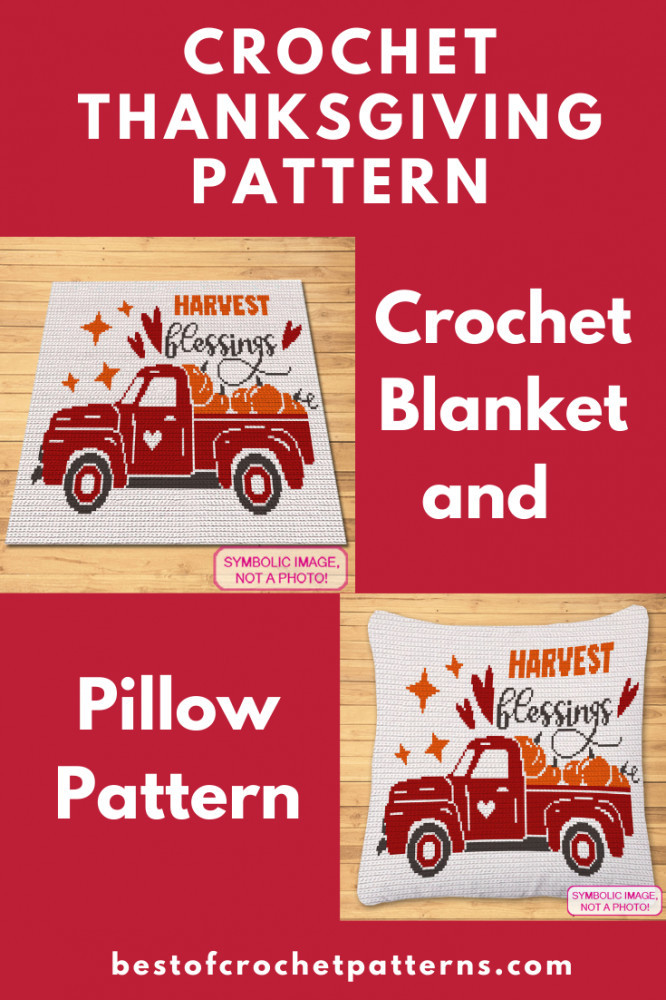 The second pattern is – Thankful.

This pattern includes a C2C blanket pattern and Tapestry Crochet written instructions for a blanket and instruction on making a pillow. You can use the technique you like better.

You can get the pattern here or click the photo below. 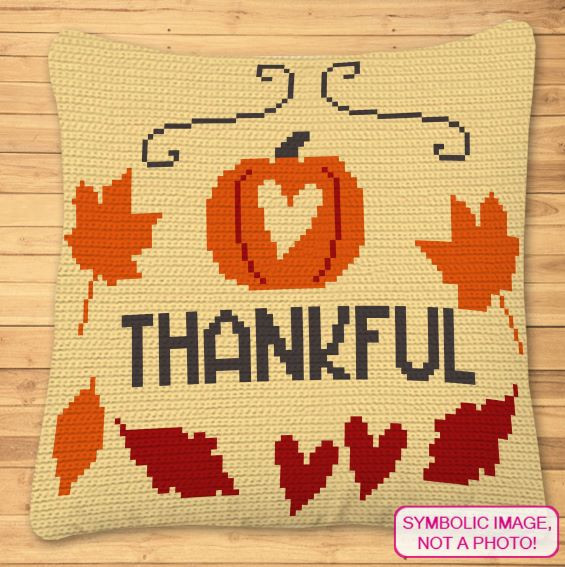 This Thanksgiving Crochet Pattern is a C2C Blanket Pattern, and it also includes Tapestry Crochet written instructions for a
blanket and instruction on how to make a pillow. You can use the technique you like better.

Click here to buy the pattern or the photo below. 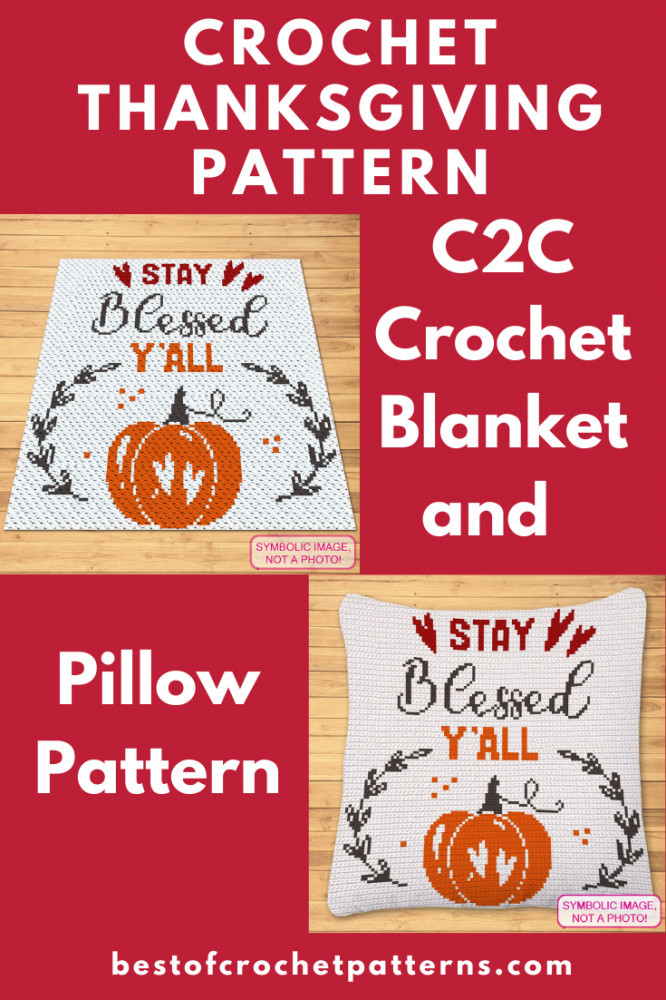 Together is our favorite place to be.

This Thanksgiving Crochet Pattern, it is a Graph Pattern for a Blanket and a Pillow with Written Instructions.

Click to get it here or the photo below. 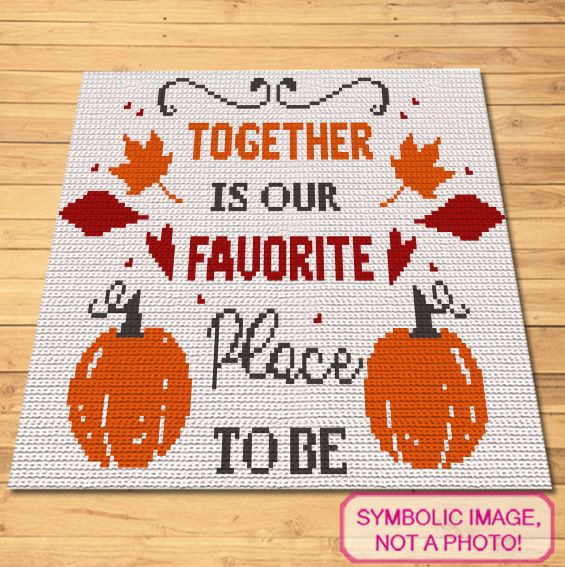 Don’t you just love Fall decor in your home? This blanket or pillow would also be a nice housewarming gift.

Fall Crochet Blanket Pattern, it is a Graph Pattern with Written Instructions. This
pattern is a C2C blanket and it also includes Tapestry Crochet written instructions for a blanket and instruction on how to make a pillow. You can do it all. 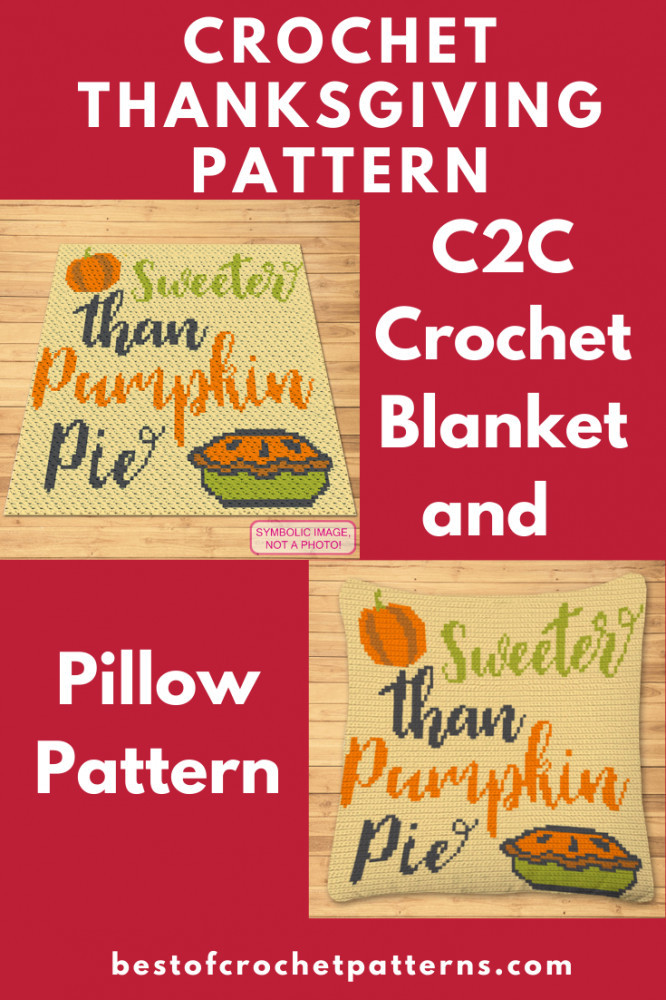 And the last one is – Mommy’s little turkey

Get it here or the photo below. 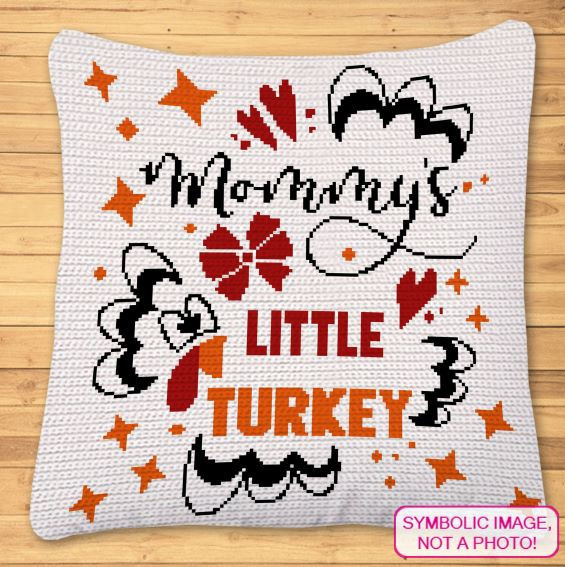 And now finally here is the FREE PDF Download Pattern.

All my Thanksgiving and Fall Crochet patterns are on sale this month
(November 2020), but because you are my reader, I want to give you a
special discount code: BESTOFCROCHET. Use it, and get 20% off on all of my patterns. I am adding new ones every day, so make sure you put my shop into favorites and stay on top of things.

Thank you for reading all the way through the end. Here is a FREE PDF pattern for you. To get it click here or the photo below. 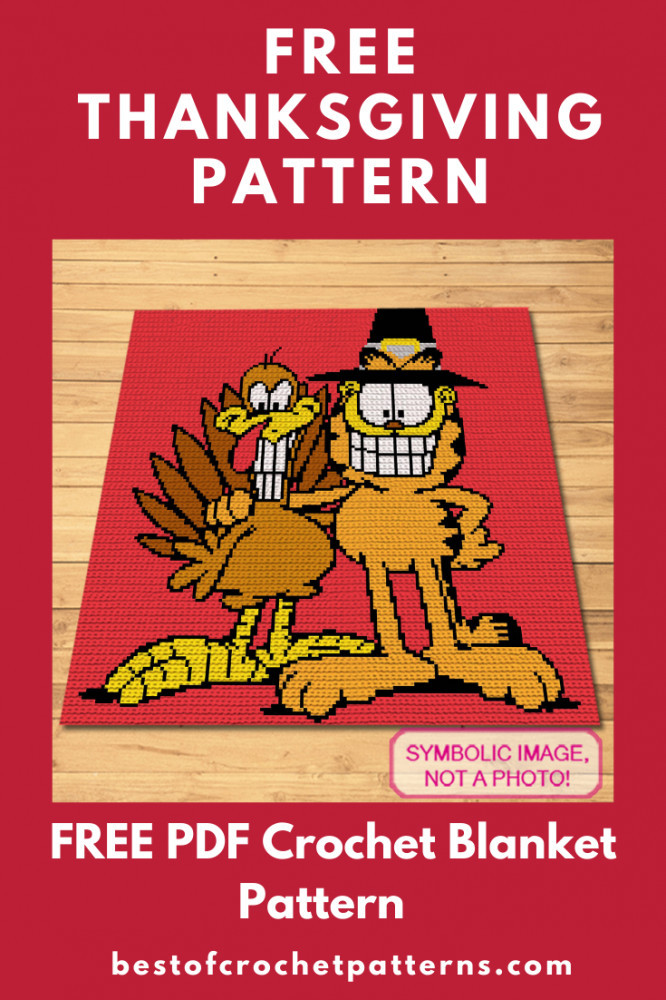