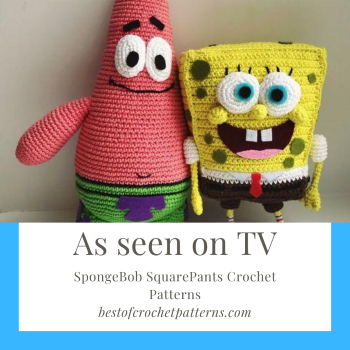 It is time for another post from As seen on TV series. You can read the others here. Today I will write about SpongeBob SquarePants Crochet Patterns.

I am sure you all know this famous American animated comedy television series SpongeBob SquarePants. It was created by marine science educator and animator Stephen Hillenburg for Nickelodeon in 1999.

The fifth-longest-running American animated series, its popularity has made it a media franchise. It is the highest-rated series to air on Nickelodeon and ViacomCBS Domestic Media Networks’ most distributed property. As of late 2017, the media franchise has generated $13 billion in merchandising revenue for Nickelodeon.

The series features misadventures of a talking sea sponge who works at a fast food restaurant, attends a boating school, and lives in an underwater pineapple. SpongeBob and his aquatic friends live in a fictional underwater city of Bikini Bottom. They are located in the Pacific Ocean beneath the real-life coral reef known as Bikini Atoll. 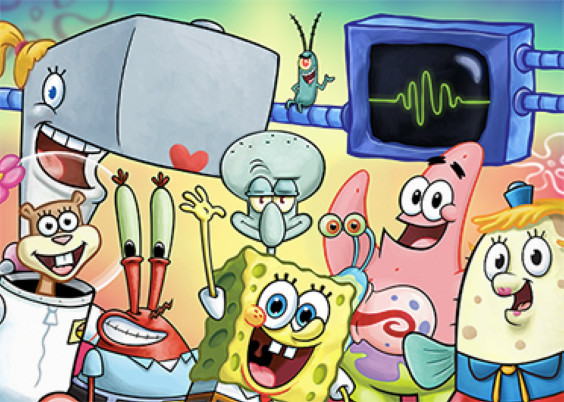 You can find the most adorable SpongeBob SquarePants and his friend’s crochet patterns below. I have found all of them in the Etsy shop Amigurushki. The founder of the shop is Mariya Kozlova from Yaroslavl, Russia.

SpongeBob SquarePants is an energetic and optimistic sea sponge who lives in a submerged pineapple with his pet snail Gary, who meows like a cat.

SpongeBob has a childlike enthusiasm for life, which carries over to his job as a fry cook at a fast food restaurant called the Krusty Krab. His greatest goal in life is to obtain a license to drive a boatmobile. His favorite pastimes include “jellyfishing”, which involves catching jellyfish with a net like a butterfly catching and blowing soap bubbles into elaborate shapes.

He is characterized by his optimism and childlike attitude and is influenced by other comedic characters, including Stan Laurel and Pee-Wee Herman. He is voiced by actor and comedian Tom Kenny.

SpongeBob SquarePants has become popular among children and adults. The character has garnered a positive response from media critics and is frequently named as one of the greatest cartoon characters of all time.

“If you believe in yourself, with a tiny pinch of magic all your dreams can come true!”

You can find his pattern here, or click on the photo. 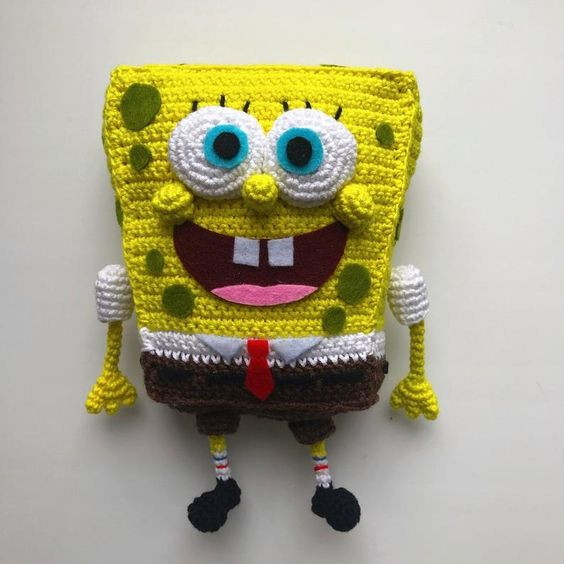 Living two houses away from SpongeBob is his best friend Patrick Star, a dim-witted yet friendly pink starfish who resides under a rock. Despite his mental setbacks, Patrick sees himself as intelligent.

His most significant character trait is his lack of common sense, which sometimes leads him and his best friend, SpongeBob SquarePants, into trouble. Patrick is unemployed and a self-proclaimed expert in the “art of doing nothing”.

At home, Patrick is usually depicted either sleeping, watching TV, or engaged in the “art of doing nothing”. All the furnishings in the space under his rock are made of sand, and Patrick can simply opt to quickly build up furniture as needed; even so, his living space is sparse and contains only the barest essentials.

Aside from his best friend SpongeBob, who is often impressed by Patrick’s capacity to come up with naïve yet genius plans or solutions, Patrick frequently irritates those around him and is confounded by the simplest of questions or subjects.

Patrick: How much is it?
Mr. Krabs: Five dollars.
Patrick: All that I have is seven.
Mr. Krabs: Deal.
Patrick: Patrick Star, you are one smart shopper.

You can find his pattern here or click on the photo below. 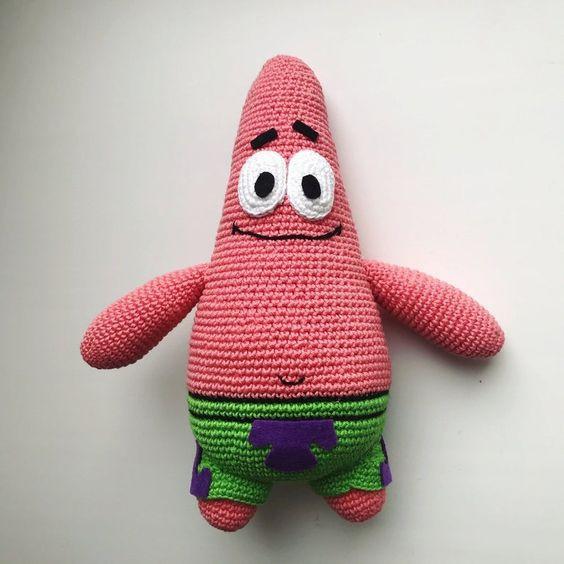 Eugene H. Krabs, simply and better known as just Mr. Krabs, owns and operates the Krusty Krab, a prominent fast food restaurant located in the underwater city of Bikini Bottom. Mr. Krabs talks like a sailor and runs his restaurant as if it were a pirate ship.

He resides in a hollow anchor. He is a single parent with one teenage daughter, a sperm whale named Pearl, to whom he wants to bequeath his riches. Pearl does not want to continue the family business and would rather spend her time listening to pop music or working at the local shopping mall.

Krabs is obsessed with money and dislikes spending it, but will go to great lengths to make Pearl happy. He tends to worry about his riches and neglect his employees’ needs, SpongeBob, who works as a fry cook, and Squidward as a cashier.

He is in a romantic relationship with Mrs. Puff. His love for Mrs. Puff is so strong that it temporarily transcends his greed and drives him to buy her expensive gifts.

The restaurant’s success is built on little competition and the popularity of the Krusty Krab’s signature sandwich, the Krabby Patty, the formula to which is a closely guarded trade secret. Mr. Krabs shares a rivalry with his former best friend Plankton, who owns a struggling restaurant called the Chum Bucket located across the street from the Krusty Krab.

Krabs’ former best friend Plankton is failing to steal the Krabby Patty formula with the help of his computer wife, Karen, under the assumption that they would be able to replicate the burgers and put the Krusty Krab out of business.

Krabs has a tentative father-son relationship with SpongeBob; Krabs often scolds him if he gets in trouble, but sometimes gives him fatherlike advice.

“Congratulations, sir! You have just given me my one-millionth dollar!

You can find his crochet pattern here, or click on the photo. 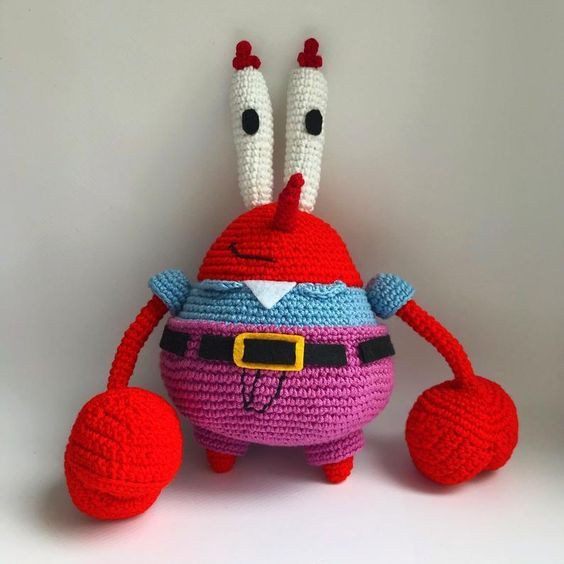 Squidward Tentacles, SpongeBob’s next-door neighbor and co-worker at the Krusty Krab, is an arrogant, ill-tempered octopus. He enjoys playing the clarinet and painting self-portraits but hates his job as a cashier. He also dislikes living between SpongeBob and Patrick because of their childish nature.

Although his name has the word “squid” in it, Squidward is an anthropomorphic octopus. He lives in a moai between SpongeBob SquarePants and Patrick Star’s houses. The character is portrayed as ill-tempered and pretentious, and he dislikes his two neighbors’ constant noisy behavior. However, the pair are unaware of Squidward’s antipathy towards them and see him as a friend.

Squidward lives in a constant state of self-pity and misery; he is unhappy with his humdrum lifestyle and yearns for celebrity status, wealth, hair, and glamorous and distinguished career as a musician or painter with a passion for art and playing the clarinet.

“I knew I shouldn’t have gotten out of bed today.”

You can find his pattern here, or click on the photo. 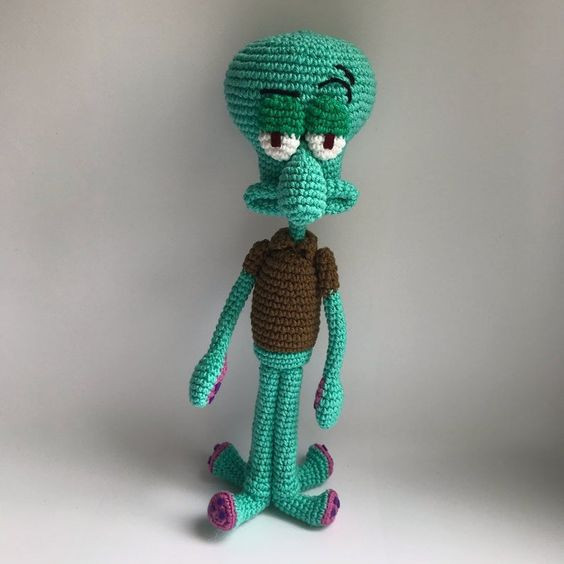 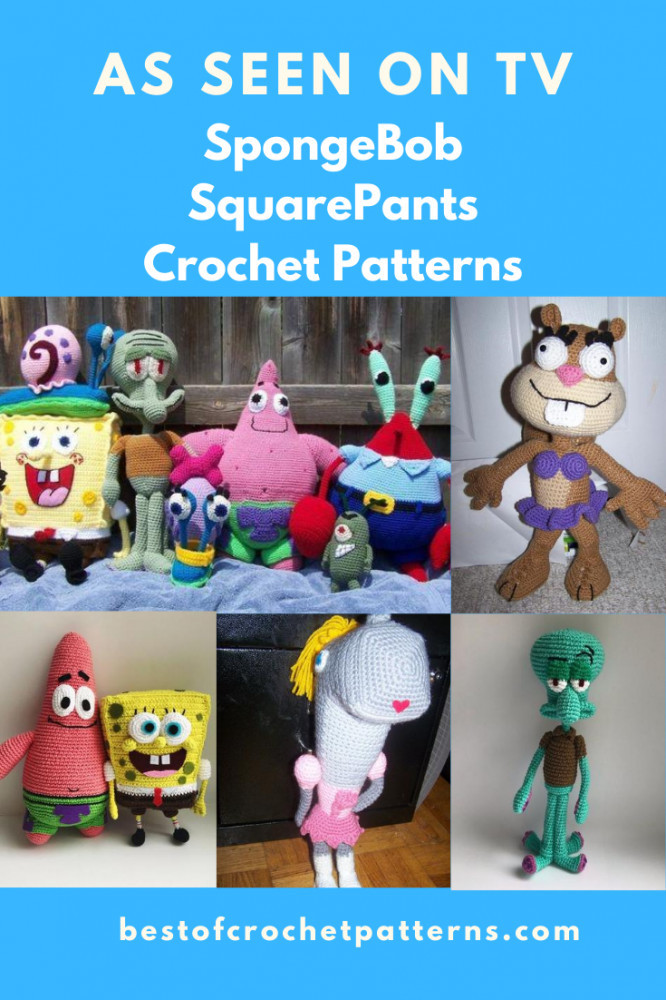 I have decided to include links to crochet patterns of other SpongeBob SquarePants friends below. To get to the pattern, just click on the photo.

Spongebob and Friends 7 Patterns by mama24boyz 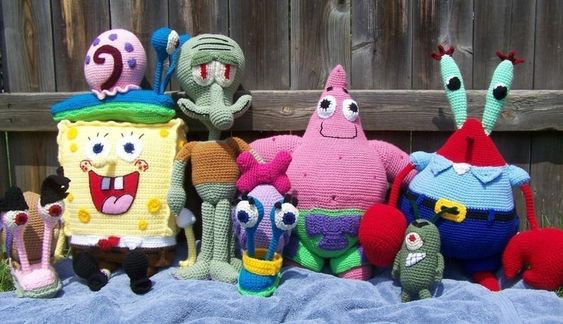 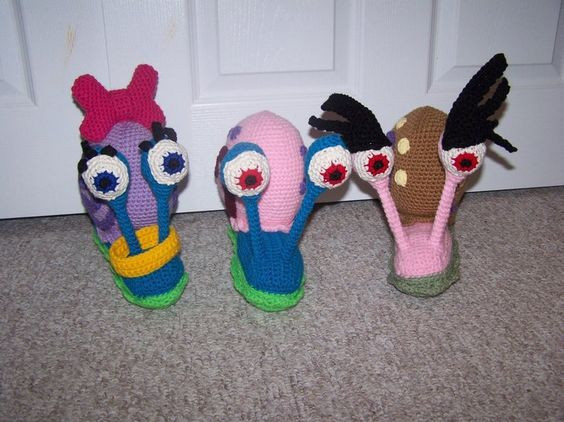 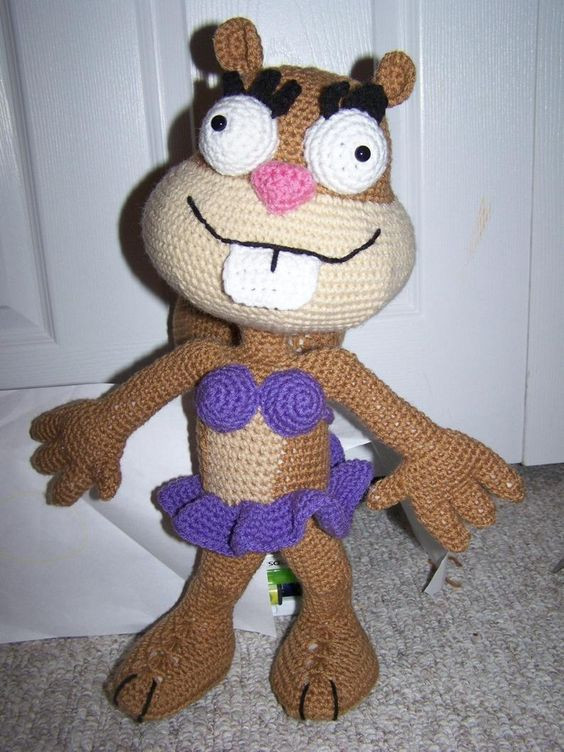 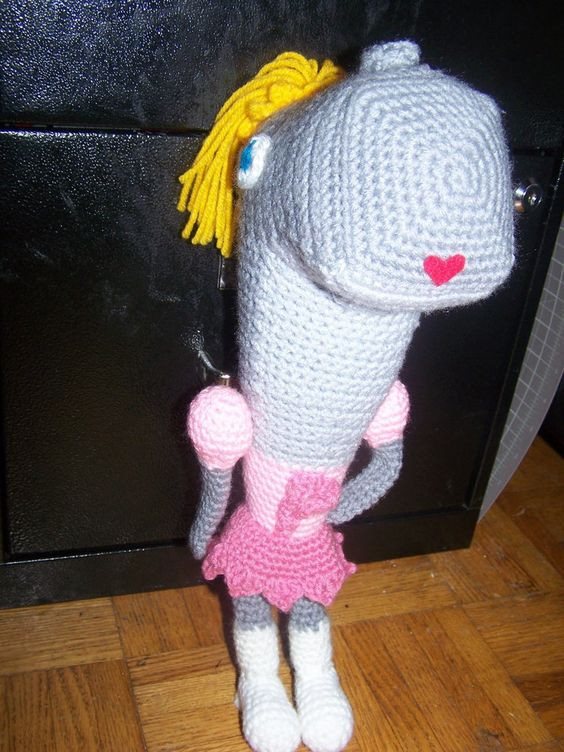 If you rather make a blanket than amigurumi, than I made this pattern for you. You can find it in my Etsy shop PrettyThingsByKatja, or click on the photo below. 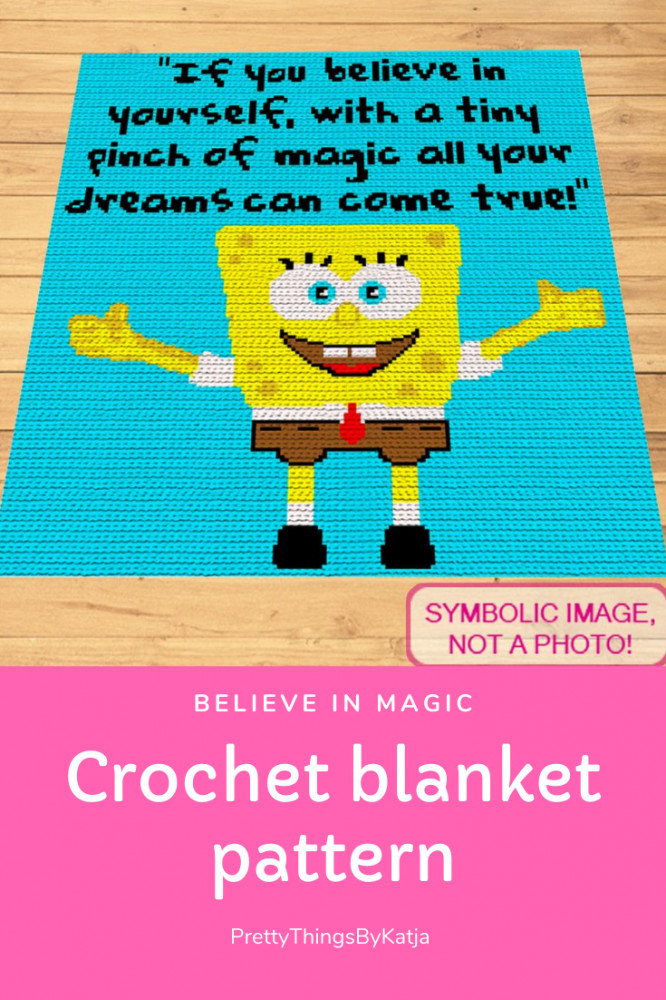 It held an average national Nielsen rating of 4.9 among children aged two through eleven, denoting 1.9 million viewers. Two years later, the series had gained a significant adult audience – nearly 40 percent of its 2.2 million viewers were aged 18 to 34.

By the end of 2001, SpongeBob SquarePants boasted the highest ratings for any children’s series on television. Weekly viewership of the series had reached around fifteen million, at least five million of whom were adults.

Did any of that information surprise you? Do you like Sponge Bob SquarePants too? Who is your favorite character? Please share with me in the comments below.

I hope you enjoyed my post. There are a lot more on the way, so follow me for more.