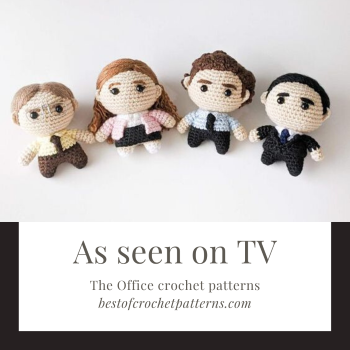 I have decided to do a series of As seen on TV blog posts about crochet patterns. Today I will show you The Office Crochet Patterns.

I believe you all know the TV Series The Office that was filmed from 2005 to 2013. I must admit I didn’t watch all nine seasons. The Office is a mockumentary on a group of typical office workers, where the workday consists of ego clashes, inappropriate behavior, and tedium. It has an 8.9 rating on IMDb.

Did you know that American TV series is an adaptation of the 2001-2003 BBC series of the same name, adapted for American television by Greg Daniels (a veteran writer for Saturday Night Live, King of the Hill, and The Simpsons)?

Like its British counterpart, the series was filmed in a single-camera setup without a studio audience or a laugh track to simulate the look of an actual documentary. The Office originally featured Steve Carell, Rainn Wilson, John Krasinski, Jenna Fischer, and B. J. Novak as the main cast; however, the series experienced numerous changes to its ensemble cast during its run. Notable stars outside the original main cast include Ed Helms, Mindy Kaling, Craig Robinson, James Spader, Ellie Kemper, and Catherine Tate. 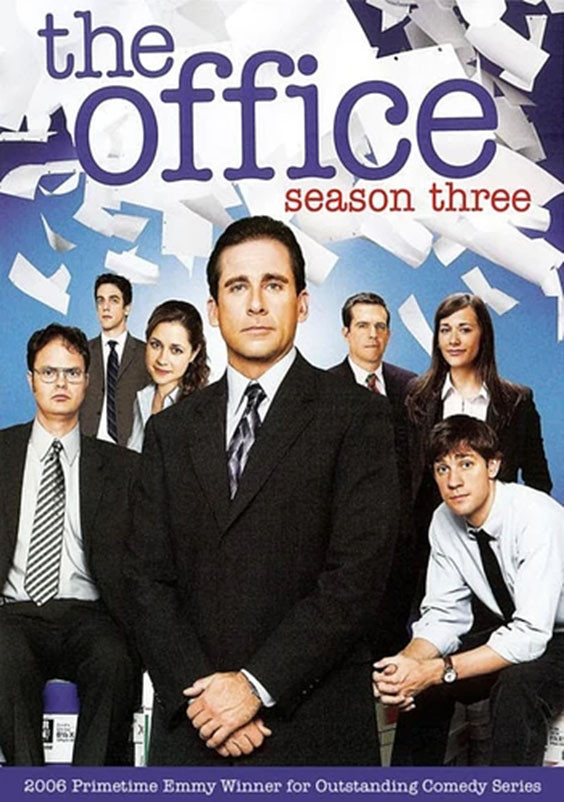 If you are a big fan of the show, I am sure you will want to crochet the main characters. I have found such fantastic patterns; you recognize right away who is who, even if you have seen just a couple of episodes.

The designer of all the patterns featured in this blog post is Michelle, from Nashville, TN, United States. She is the founder of CuriousNarwhal Etsy shop, where you can find her collection of “The Office” dolls.

Below you will find four main characters: Michael Scott, Dwight Schrute, Jim Halpert, and Pam Beesly. Check it out; to access the patterns, click on the photo.

I added some story behind the characters, so if you haven’t watched the whole series yet, be aware that there could be some spoilers.

Michael Gary Scott, one of the most beloved characters in comedy history, The Office’s Michael Scott, was known among his work peers for his stupidity, accidental offensiveness, and his massive heart. Michael’s catchphrase is, “That’s what she said!”

He is portrayed by Steve Carell and based on David Brent from the British version of the program. Michael is the central character of the series, serving as the Regional Manager of the Scranton branch of a paper distribution company, known as Dunder Mifflin Inc. from seasons 1 through 7.

Say hello to the world’s best boss! To go to the pattern, click here or on the photo. 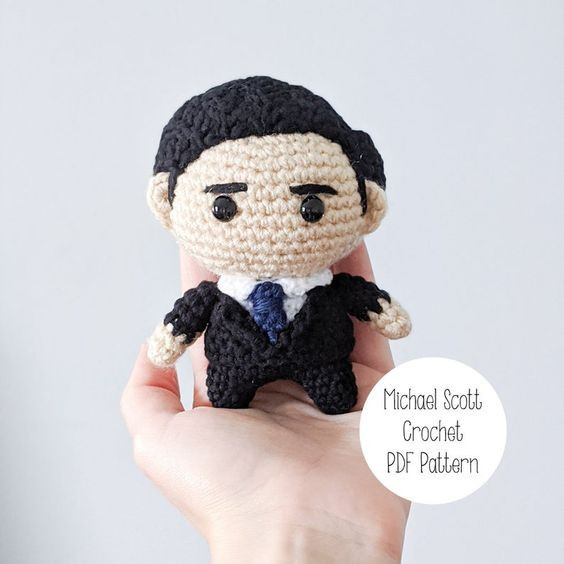 The Office may have shut its doors in 2013, Dwight K. Schrute remains a part of the pop-culture consciousness. He’s loud, intense, and a hilarious collection of complex contradictions combined to make one of television’s most memorable dunces.

Dwight K. Schrute is portrayed by Rainn Wilson. He was a salesman and the assistant to the regional manager at the paper distribution company Dunder Mifflin, before his promotion to regional manager in the final season. He is also a bed-and-breakfast proprietor at Schrute Farms, a beet plantation owner, and the owner of the business park, which Dunder Mifflin Scranton is located in. He is known for his lack of social skills and common sense, love for martial arts and the justice system, and his office rivalry with fellow salesman Jim Halpert.

The Dwight Schrute character has had a very positive reception and is often cited as one of the most popular characters on the show. According to Entertainment Weekly, he is one of the “greatest sidekicks.” In the TV Guide’s list of the top 100 characters in television history, Dwight was ranked 85th.

“Before I do anything, I ask myself, ‘would an idiot do that?’ And if the answer is yes, I do not do that thing,” This is perhaps one of the most well-known things Dwight has ever said.

To go to the pattern, click here or on the photo. 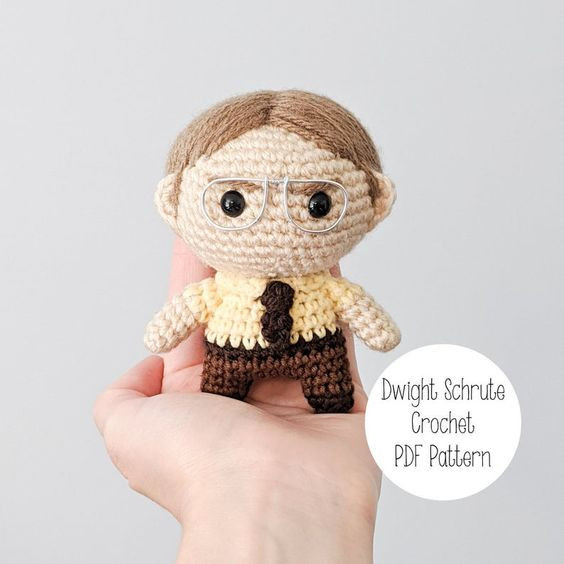 His character serves as the intelligent, mild-mannered man. However, it is also defined by a rivalrous pranking on fellow salesman Dwight Schrute and a romantic interest in receptionist Pam Beesly, whom he begins dating in the fourth season, marry in the sixth, and has children with in the sixth and eighth. Jim’s coworker, Andy Bernard, often calls him by the nickname “Big Tuna.”

Jim Halpert is portrayed by John Krasinski and is one of the most likable and relatable characters on The Office. He is hilarious, charming, sarcastic, and romantic. While some of his best moments were when he was joking around and pranking Dwight, he was also a huge romantic when it came to his relationship with Pam.

The relationship between Jim and Pam is one that many fans loved, and that is still seen as an iconic television couple. While Jim wasn’t a perfect guy, he and Pam were definitely made for each other, and he loved her a lot.

“Everything I have I owe to this job…this stupid, wonderful, boring, amazing job.” 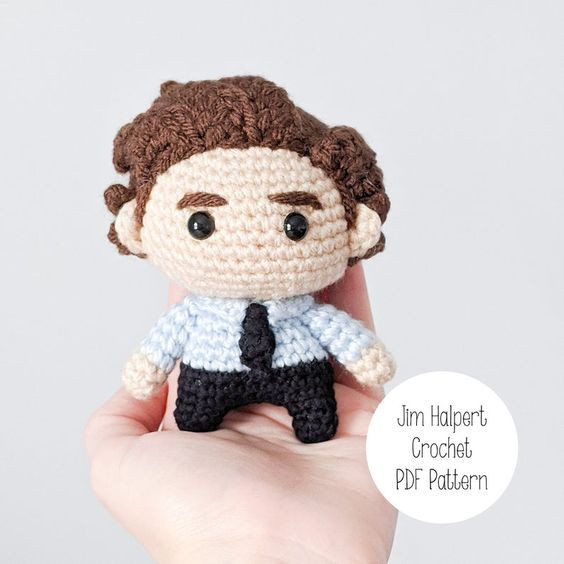 Pam Beesly, played by Jenna Fischer, was arguably the main character of The Office, along with Jim Halpert (John Krasinski). In addition to showcasing all of the quirks that come with working in an office, perhaps the main plotline of the show focused on Jim and Pam’s relationship.

“I don’t think it’s many little girls’ dreams to become a receptionist.”

She is initially a receptionist at Dunder Mifflin Paper Company, before becoming a saleswoman, and eventually an office administrator until her termination in the series finale.

She shares a romantic relationship with Jim Halpert and begins dating him in the fourth season. They get married in season six and have two children throughout the series. Pam’s kindness and compassion mean she is well-liked amongst her coworkers and develops strong relationships with them as the series progresses.

To get the pattern, click here or on the photo. 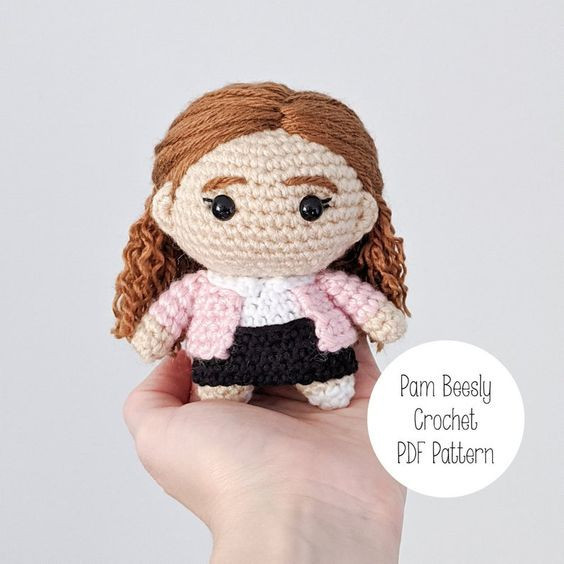 Maybe you are a die-hard fan of The Office, or maybe you don’t have the slightest clue about this TV series. In any case, I hope this article provided enough valuable information and ideas to make you see that crocheters can make beautiful products based on our everyday lives’ inspiration.

On the photo below, you can see The Office Blanket Crochet Pattern form PsychedelicDoilies on Etsy. To get to the pattern, click here on the photo. 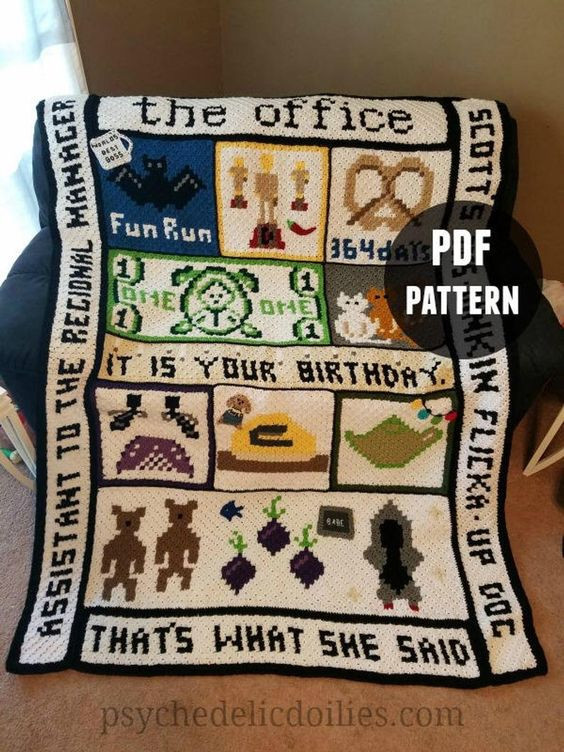 I hope you enjoyed a little trivia about The Office, and I hope this article wasn’t too much of a spoiler for you. Which character do you like the most? Please, share with me in the comments below.

You can Pin this for later here: 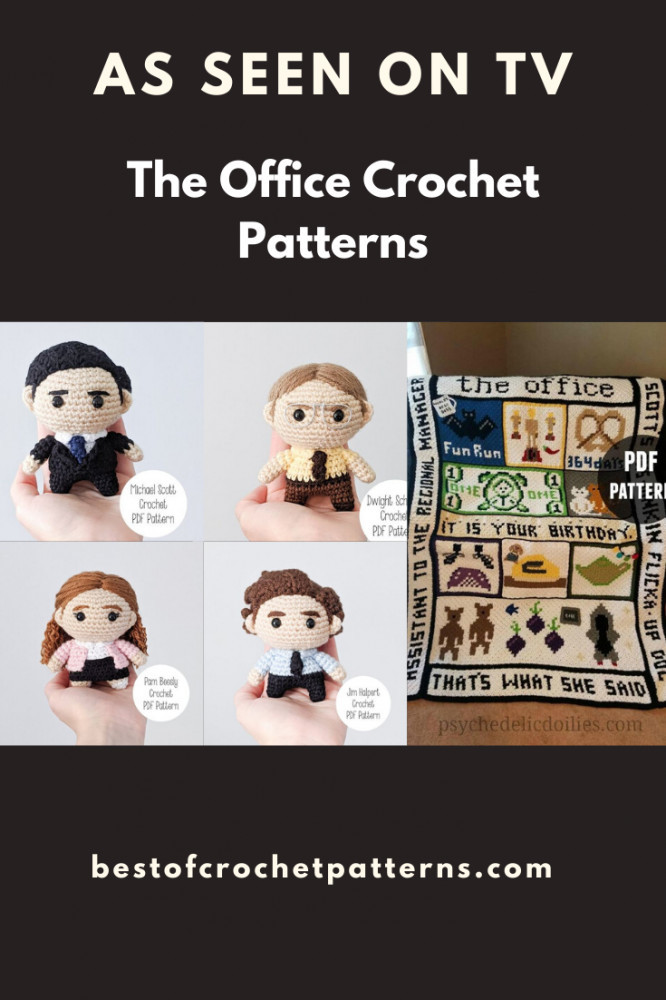 4 thoughts on “As seen on TV – The Office Crochet Patterns”